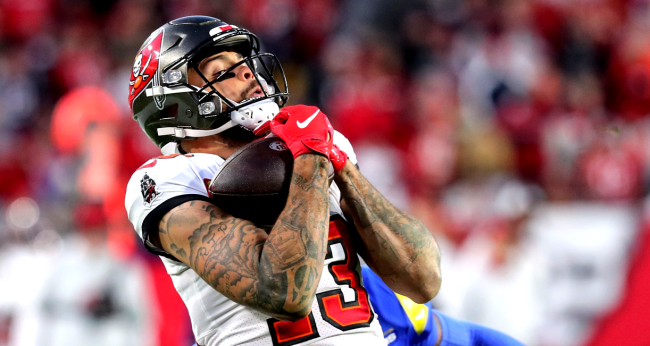 Back on January 23, 2022, Tom Brady threw what the world of sports thought was the final touchdown pass of the legendary quarterback’s career. It was also Brady’s 86th career playoff touchdown, an NFL record.

The football that was thrown to Mike Evans ended up in the hands of a fan in the stands when the wide receiver handed the ball to someone in the crowd. (Evans also did this with Brady’s 600th touchdown pass, but they managed to get that ball back from the fan.)

It was eventually sold off in an auction that began on Super Bowl Sunday and ended up fetching $518,000.

Or, well, it did until less than one day after the collector made the massive bid and Tom Brady announced that he was actually not going to retire. Whoops!

When we said this was the final touchdown pass of @TomBrady’s career, we should have said…

Brady’s un-retirement immediately left the buyer, according to his attorney, “genuinely mortified” and looking to void the sale.

Thankfully for him, Lelands auction house allowed him to do so after he and the seller mutually agreed to void the sale.

Lelands also, in announcing the sale cancellation, said that their were still “multiple parties interested in purchasing the football” and so they were hanging on to it.

Fast forward a little over four months and, yep, Tom Brady’s final, but not final, touchdown ball is going back on the auction block.

Billed as “Tom Brady’s Last Pre-Retirement Touchdown Football,” the starting bid for the ball is now $25,000.

“Though the perspective has changed, this remains a magnificent piece nonetheless. For 40 days, this stood as one of the most significant game used footballs in history,” reads the listing.

It also states, “It is worth noting, however, that at this point in time, TB12 has not yet returned to the gridiron, and should things change between now and the start of the season, this could, in fact, still be Brady’s final touchdown ball.”

And guess what? Someone has already placed a bid.

Reactions to the football going back up for auction, which runs through September 17th, have been pretty entertaining.

Are you sure it's not his final touchdown ball? He may be due for another vacation once the season gets underway.

Would be kind of funny if it sold for 25k, then Brady got hurt and retired before throwing a TD and it became his last TD ball again

The football is worthless