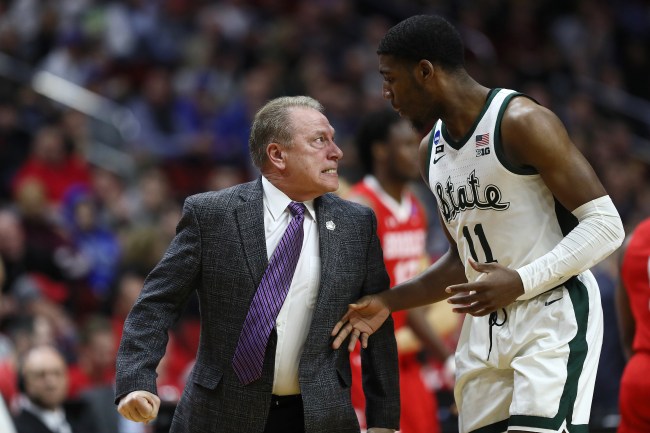 Tom Izzo’s fiery confrontation with freshman Aaron Henry during Michigan State’s first round win over Bradley has been the most polarizing issue of the tournament thus far. *Referees breathe a collective sigh of relief*.

The Spartans head coach ripped Henry a new orifice during a second half timeout following a 10-0 run by MSU. The encounter was so animated that Cassius Winston had to step in with a cooler head and separate Izzo from Henry.

Tom Izzo loses it on his freshman Henry 👀 pic.twitter.com/j25dSjT9Ra

Izzo, who’s no stranger to showing a player up in front of thousands of people, was blasted by college basketball fans who believe he gets too many passes for his aggressive on-court behavior.

After the game, Izzo discussed with the media the genesis of the blow-up.

Here's Tom Izzo's full explanation about Aaron Henry, why he went after him, and his evaluation of the results.

And included is the answer to a question from @TheSpartanMag about going to Henry late. pic.twitter.com/7KigXeMljD

“This is one-and-done time,” Izzo said. “The ‘my bads’ are out the window. If they’re ‘my bads’ because that team played better or that guy played better — if it’s ‘my bad’ because you decided to jog back instead of sprint back, then it is your bad. That’s what it was.”

“I don’t know what business you guys are in. But if I was a head of a newspaper, and you didn’t do your job, you’d be held accountable.”

Several of Izzo’s former players jumped on Twitter to defend their coach.

I been yelled at like that before and got the next play called for me. Lol run screen rescreen I’m gone try to tear the rim off 🤷🏾‍♂️😂😂😂😂.

So coaches cant yell at players now? Lol Izz cares about his players more than half these other college coaches. 600+ wins for a reason. #GoGreen

Speaking to Chris Solari of The Detroit Free Press after the game, Henry chalked his coach’s outburst up to no biggie.

“I wouldn’t say he’s more demanding. He knows that I think I can rise to the challenge, because I’ve been doing that all year I feel like. It’s just if my plate gets bigger, I got more food to eat. I just gotta eat it.”

From the MSU locker room, Aaron Henry sure didn't have a problem getting yelled at by Tom Izzo: "It's nothing new, it's just responding to it, accepting the coaching, not having a pity party for yourself, just being a basketball player and go respond."

Would you guys prefer to play with an Izzo type or a Brad Stevens type?