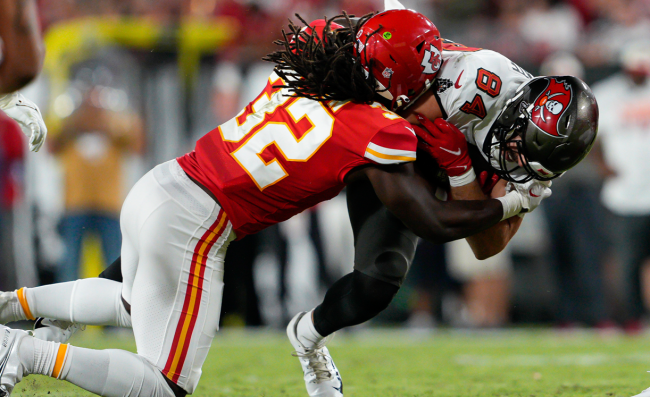 Following the gross mishandling of Tua Tagovailoa, many any football fans are now hypersensitive to any player showing signs of a possible head injury.

Tagovailoa, who appeared to suffer two concussions in the span of just five days last week, has been ruled out of the Dolphins’ Week 5 against the New York Jets.

As a result of the troubling situation with Tagovailoa, the doctor who cleared the 24 year-old quarterback to return to play in Week 3 was fired from his job as a Unaffiliated Neurotrauma Consultant for the NFL.

There are still many questions, however, that need to be answered going forward with regard to how concussions are diagnosed.

Those questions were put back into the spotlight during Sunday night’s game between the Chiefs and Buccaneers.

After catching a pass during the second quarter of the game, Tampa Bay tight end Cameron Brate suffered a hit to the head and was clearly trying to shake out the cobwebs as he regained his feet and attempted to run off the field (which he did, but not before Tampa was called for a 12 men on the field penalty.)

When will we learn?! #Bucs TE Cameron Brate returned just a few plays after this blow to the head.

He was later placed in concussion protocol. A second hit to the head when the brain is still recovering from a concussion is incredibly dangerous pic.twitter.com/R0TjrHvWMq

Brate was reportedly checked for a concussion, cleared, and returned to the field of play.

Sideline reporter Melissa Stark said during the game that Brate was allowed to go back in after a “two-minute chat conversation with the head athletic trainer and team doctor.”

At halftime of the game, Brate was placed into the concussion protocol.

The fact that all of this occurred was more than former NFL head coach Tony Dungy could take silently.

“Broken system,” Dungy tweeted. “I was on the sideline very close to Brate-obvious he had his bell rung. There’s a league appointed spotter in the press box who should stop play & alert the referee. Brate shouldn’t have been allowed to return until after an evaluation. Why didn’t that happen???”

ESPN reporter Jenna Laine spoke to Buccaneers head coach Todd Bowles and about the process of evaluating Cam Brate and the decision to allow him to return.

“He said he’d need to go back and look at the tape,” Laine reported.

NFL fans, once again, were also angry with the seeming lack of medical attention a concussed player received. And it wasn’t just limited to Cameron Brate.

The CEO of the Concussion Legacy Foundation, Chris Nowinski, who has been very vocal regarding these types of situations, noticed something similar occur during the Vikings-Saints game on Sunday.

Vikings appear to pull out the smelling salts here, which are famous for being used to revive someone after a #concussion. While also used "recreationally" it's a terrible look for the NFL after Tua.
Thanks ⁦@alanschwarz⁩, who we all owe a lot to, for the video. pic.twitter.com/gn3aW5ifZ3

A source with knowledge of the Tua Tagovailoa situation told ProFootballTalk.com over the weekend that the “gross motor instability” loophole that reportedly allowed Tua to re-enter the Week 3 game will be removed.

The NFL and NFL Players Association both will have to agree to the move, however, for it to officially happen.