Tony Dungy Is Getting Dragged For His Comments About Jon Gruden 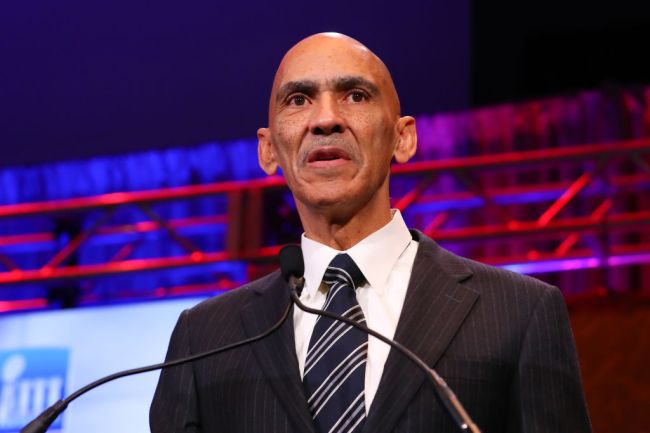 Tony Dungy is on the receiving end of some harsh criticism following comments he made about Jon Gruden during Sunday Night Football’s broadcast in the aftermath of Gruden’s resignation.

As of Sunday night, the only Gruden emails that had surfaced were the ones regarding NFLPA executive director DeMauarice Smith. Gruden mocked the size of Smith’s lips saying they were the “size of Michelin tires.”

During the SNF broadcast, both Mike Tirico and Dungy defended Gruden essentially saying that the now-former Raiders head coach is deserving of another chance following his apology.

Dungy made a point during the broadcast to point out that he wasn’t going to chalk up Gruden’s mistakes or “everything up to racism” while emphasizing the email was a decade old.

“We heard Jon Gruden say he addressed this. He gave his side of it. He said that it wasn’t racial, that he was making a comment about DeMaurice Smith, and he basically attacked his character,” Dungy said, according to Larry Brown Sports. “I will accept that and just say that it was an immature way to do it.

“It wasn’t the right way to do it. But it was 10 years ago. And I’m not going to chalk everything up to racism. I think we accept his apology, move forward, and move on with his team.”

At that point in time, it was more than fair for Dungy to share his thoughts about the situation at hand and give his two cents. Things changed less than 24 hours later, however, when more disturbing emails from Gruden surfaced that ultimately led to his resignation as Las Vegas’ head coach.

Folks on Twitter may have a short memory, but not that short. Plenty of people were quick to criticize Dungy’s comments as the other Gruden emails surfaced.

Dungy took to Twitter early Tuesday morning to further explain his stance on the Gruden situation.

Now more e mails have come. More inappropriate, immature, wrongful attacks on the character of people from all walks of life. I don’t defend those either and given the apparent pattern of behavior the Raiders did the appropriate thing in terminating Jon Gruden.

That being said, if Jon Gruden shows TRUE remorse-and more importantly changes his mindset and actions-I would forgive him. As Christians that’s what the Bible commands us to do because that’s what God does for us. I know that’s not popular but it’s biblical. pic.twitter.com/yrhFU3i7o7

The announcement of Gruden’s resignation came during Monday Night Football.