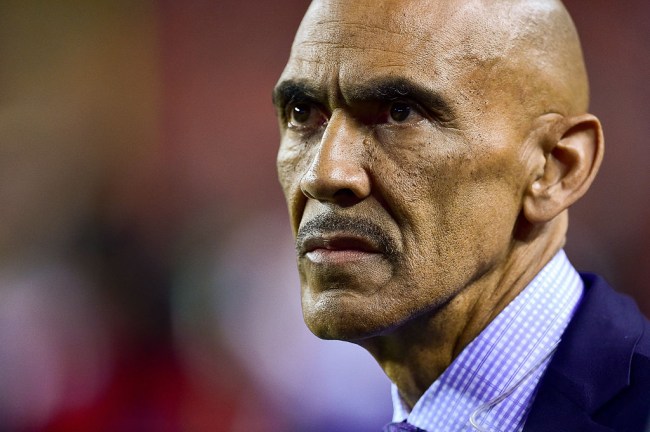 The Raiders were recently forced to deal with enough drama to rival an episode of Dance Moms after Antonio Brown did seemingly everything in his power to be released by the team and his wish came true on Saturday when he found himself on the market after Oakland gave in to his demands.

Before the news broke, countless people speculated it was only a matter of time until the wide receiver ended up signing with the Patriots and one anonymous NFL coach’s prophecy came true when Brown ultimately inked a deal with New England that will reportedly result in him earning a solid chunk of change.

Plenty of people weren’t exactly thrilled to hear the Pats roster was slated to become even more stacked than it already is—including Tony Dungy, who ripped into the organization after hearing the news.

Here’s what he had to say about the situation ahead of last night’s game via NBC Sports:

“I coached 13 years, and every year my first message to the team was, ‘We want to win the Super Bowl, yes, we want to be talented, but we have to be role models. These kids in our country look up to NFL players and coaches, and I really think this sent the wrong message.

I know coaches want to win but I’m disappointed in Robert Kraft. I think at some point you say, ‘Just as an organization, we’re not going to do this.'”

As The Spun notes, the Patriots have a pretty impressive track record when it comes to dealing with “problem” players like Randy Moss and Josh Gordon, the latter of whom had a solid night on Sunday after making his comeback following a battle with substance abuse issues.

As a result, something tells me Brown’s signing is going to turn out just fine even if Dungy isn’t a fan.