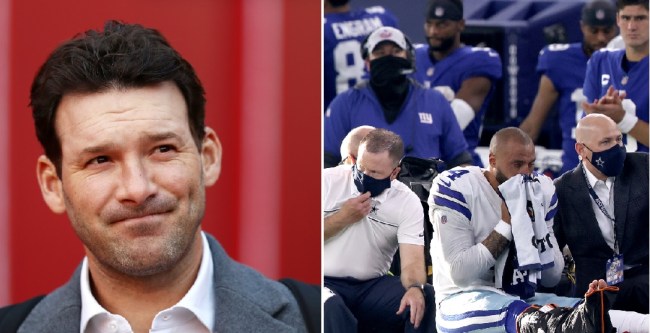 Cowboys’ QB Dak Prescott suffered one of the ugliest injuries of the season but you wouldn’t have known that if you were listening to Tony Romo during the game.

As Prescott’s ankle looked like it was bending the wrong way, Romo exclaimed “You gotta hope it’s a cramp.’

*Prescott’s leg literally snapped in half*

His ankle snapped like a pretzel and a Romo goes you Gotta hope it’s a cramp. Dude are u on meth????

Dak’s X-Ray be like… Tony Romo “I hope it’s a cramp” pic.twitter.com/MdzzoU8ntd

Dak Prescott's foot is at a 90-degree angle from his leg and Tony Romo: "You gotta hope it's just a cramp."