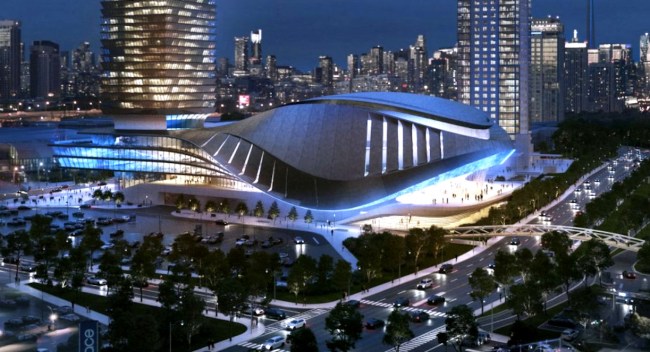 Forget JerryWorld and the Death Star in Vegas, Toronto will shortly be the new home to a $500 million arena that will be built for esports.

The new arena, which looks like a spaceship landed in downtown Toronto and scheduled to be completed in 2025, will be the home of OverActive Media’s Overwatch League and Call of Duty League franchises, the Toronto Defiant and Toronto Ultra respectively.

OAM, which launched in 2017, has also fielded teams in the League of Legends European Championship, Rocket League, Starcraft and Smite.

"This best-in-class performance venue will be the chosen home for a new generation of fans that think differently about their entertainment choices and experiences.”
– @chrisoverholt https://t.co/NRXCrnqlg4

Populous, a global design firm, has been hired by OverActive Media to design the facility which plans to host more than 200 events a year including music, entertainment, conventions, corporate events, awards shows, and esports.

“It has always been our intention to develop a venue and hosting strategy and to build a facility that could not only serve as an iconic home for our two franchises, but ultimately emerge as a global hub for major international esport events,” said OverActive president and CEO Chris Overholt.

24 hours in: 256 articles, 37 countries, and 400 million global media impressions on yesterday's performance venue news. This has been the biggest media moment for our organization. #esports #entertainment #sportsbiz #music https://t.co/dDbKVH5kvY

The Toronto City Council and Exhibition Place board of governors have yet to approve the proposal, but Overholt says, “We are in the final stages of putting our business terms together with city officials and we are optimistic that we can soon wrap up our discussions to everyone’s satisfaction.”

OverActive Media – the owners of the Splyce esports org – has raised $21.5 million over three rounds of funding, according to CrunchBase, and the company’s lead investor is three-time Grammy winner The Weeknd.