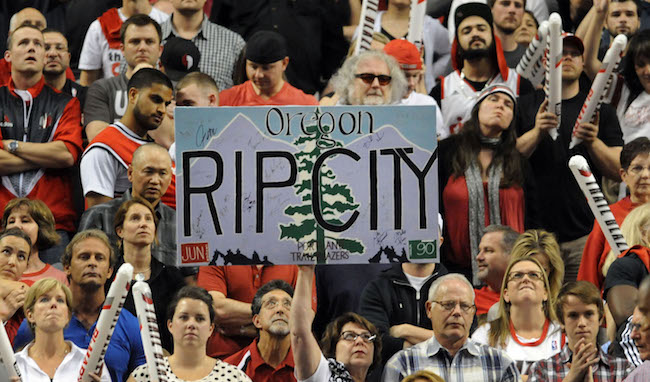 Last month, a company in Philadelphia took some inspiration from Frances McDormand’s character in Three Billboards Outside Ebbing, Missouri when it paid for a trio of ads alongside the highway leading to the Quicken Loans Arena in Cleveland in an attempt to recruit LeBron James to the 76ers when he hits free agency in the off-season. While James seemed to appreciate the gesture, Cavaliers fans quickly retaliated with some billboards of their own, and it appears roadside ads will continue to be the weapon of choice when it comes to trying to woo him away from Ohio.

According to Bleacher Report, some diehard Portland Trail Blazers fans— a group of people I assure you actually exist—have organized a GoFundMe campaign in an attempt to raise $2,000 for a billboard of their own with the goal of erecting their message by the time the NBA playoffs roll around.

The push is being spearheaded by @TRILLBLAZIN, who shared a mockup of their vision on Twitter (and is also offering some branded incentives to anyone who contributes).

While other teams might be looking towards James to lead their squad, Trail Blazers fans know they already have a superstar in the form of Damian Lillard, who likely wouldn’t mind adding the four-time MVP to a supporting cast that already includes household names like C.J. McCollum and Jusuf Nurkić.

The Trail Blazers weren’t on the list of teams James previously said he’d consider joining, and they’d risk dealing with potential chemistry problems in the locker room stemming from the disrespect he showed Nurkić with this dunk last night.

In the meantime, it might be worth looking into investing in a machine capable of producing all of the popcorn you’re going to need when James officially enters free agency at the end of the season.