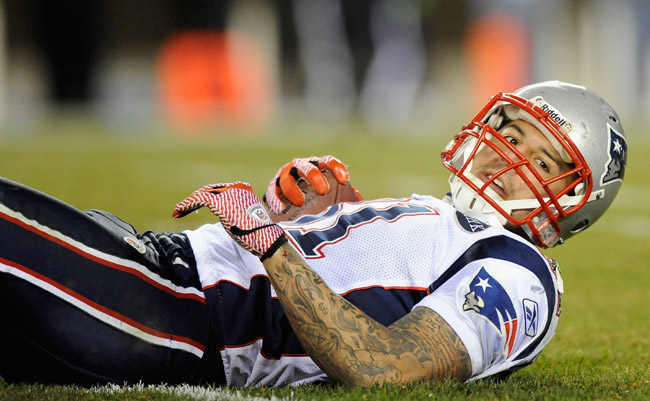 NFL players will look to get any edge against the competition even if that means trash talking about a rumored murder. A few years before Aaron Hernandez was imprisoned for the murder of Odin Lloyd, NFL players were taunting the New England Patriots’ tight end over his checkered past. Several players used what was rumors at the time to attack Hernandez including the 2007 Gainesville double shooting.

New York City’s WFAN sports talk radio show “CMB” gave insight to the on-field playing conditions where Hernandez was attacked over rumors that he had killed someone, years before his actual conviction. The “CMB” show features hosts Chris Carlin, Maggie Gray and former NFL linebacker Bart Scott. “We used to always mess with Hernandez when we were on the field and say, ‘Hey man, I heard they found the body,'” Scott said players would taunt Hernandez. “And we thought it was a joke because we knew something had happened in Florida. Like we all knew he was a bad guy, there had been stories floating around this guy for years.”

During Aaron’s college football days at the University of Florida, police questioned him about his alleged role in a double homicide. Scott speculates that the Bristol, Connecticut native being drafted by New England Patriots may have been the worst thing to him. “The hardest thing to do when you’re an athlete is to separate from where you come from,” Scott said. “We knew that he was in a gang…a lot of us grow up in gangs and what happens is it’s hard to remove yourself from them, but we’re removed by distance.” In 2015, Hernandez was found guilty of first-degree murder for killing Odin Lloyd and sentenced to life in prison without parole. Hernandez committed suicide two years later in his prison cell.