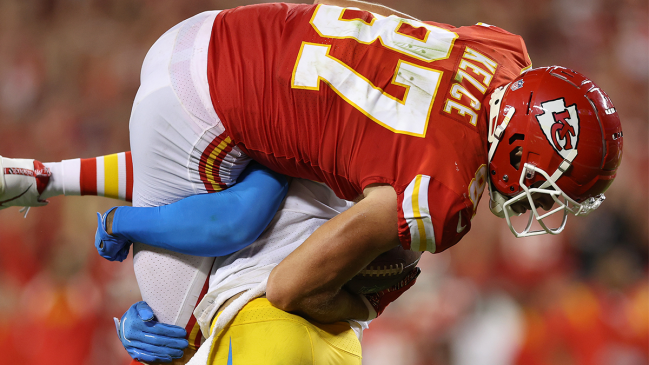 It’s been hard to watch the Kansas City Chiefs play over the past few years without encountering at least one play that makes you think “There’s no way that dude just did that,” which usually comes courtesy of Patrick Mahomes and his impressive ability to routinely pull off the Just Patrick Mahomes Things fans have become increasingly accustomed to.

That was once again the case when the Chiefs faced off against the Chargers on Thursday night, but Mahomes took a backseat on the play in question to the man who walked away with Top Dude honors on the night: Los Angeles safety Derwin James.

The Chiefs were hoping to break a 17-17 tie after finding themselves on the verge of the red zone in the third quarter, and it looked like Travis Kelce had a golden opportunity to punch the ball into the end zone after Mahomes connected with him on a pass after scrambling out of the pocket.

However, James channeled his inner Lee Corso and hit Telce with a “Not so fast my friend!” by delivering a massive tackle that saw the safety lift the tight end off the ground before slamming him down to the turf.

The Chiefs were ultimately forced to settle for a field goal on the drive, which would turn out to be the deciding score in their 27-24 victory. Kelce was also able to walk away from the play with no injuries aside from a bruised ego—but that tackle hits a bit different when you listen to what he had to say about James a few days before the game.

Earlier this week, Kelce chatted about his upcoming matchup with the Chargers with his brother (and Eagles center) Jason on The New Heights podcast, which contained a segment where both men heaped praise on James for his virtually unparalleled athleticism.

It’s very clear Travis knew James had the potential to wreak some havoc, and he inadvertently forecasted his own fate while discussing his opponent’s ability to “lay the wood”:

“Derwin James, man. He’s an absolute beast on the defensive side. I got a lot of respect for him both in the pass coverage and just absolutely throwing his weight around, man.

A lot of safeties are out here throwing their weight around, but he’s one of the bigger guys that can actually lay the wood.”