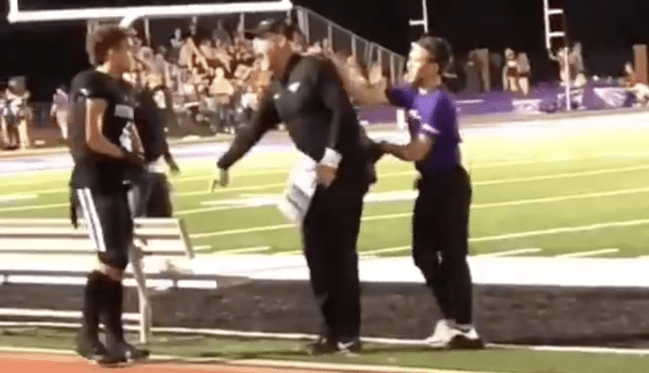 14-year NFL quarterback and Super Bowl XXXV champion Trent Dilfer doesn’t settle for anything less than excellence. The 49-year-old California-native is currently the head high school football coach at Lipscomb Academy in Nashville, Tennessee and he is off to a hot start in 2021— in more ways than one.

Dilfer loses his mind but wins the game:

Not only have the Mustangs caught fire in their first two games with a 2-0 record by a combined score of 138-14, but Dilfer was heated. Early in the first half of Friday’s win over Independence, one of Dilfer’s players spoke back to the head coach and he didn’t take kindly to the backtalk.

The player in question, wearing No. 4, is Lipscomb’s starting tight end Beau Dawson. He is the son of 20-year NFL veteran Phil Dawson, who played with Dilfer on the Browns and is friends with the head coach from his playing days.

Both Beau and Phil have a long-standing relationship with Dilfer. The two families are tight and Dilfer has taken Beau under his wing.

Dawson was the second-to-last active NFL player from the 1990s before retiring from the game in 2018. Today, he is the special teams coordinator for the Mustangs under Dilfer. His son was the player on the wrong end of the impassioned exchange.

In response to the incident, Dilfer and Lipscomb released the following statement:

A statement from our Head Coach Trent Dilfer on the viral video going around #BeSetApart pic.twitter.com/uzS1DFt03D

The scene unfolded late in the first quarter. Lipscomb held a 28-7 lead and went on to win 62-7.

It is unclear exactly what was said, but the exchange unfolded after the player spoke back to Dilfer on the sideline.

According to Caden Thieman, a wide receiver and slotback on the team, it happened after Dawson ran the wrong route. He commented on the video and explained what he saw from his vantage point:

Thieman can’t remember what Beau said, but he reiterated that Beau and Dilfer are very close.