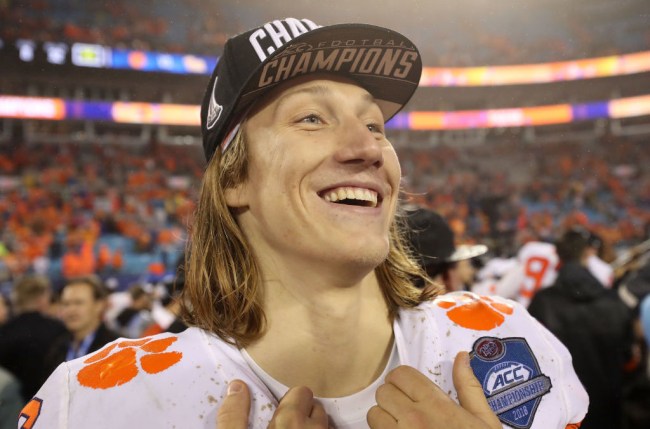 In case you missed, Clemson quarterback Trevor Lawrence got engaged over the weekend to his longtime girlfriend Marissa Mowry. Lawrence broke the news by posting a photo to Instagram showing him proposing at midfield of Clemson’s Memorial Stadium.

While plenty of fans out there trolled Lawrence for getting engaged heading into what will likely be his last season at Clemson before likely going first-overall in the 2021 NFL Draft, a Louisiana news anchor by the name of Matt Trent took things a step further.

Trent elected to reference this past year’s national championship game where LSU and Joe Burrow – aka Lawrence’s daddy in this case – beat up on Clemson.

“We end tonight with Trevor Lawrence once again giving away a championship ring on a football field. The Clemson quarterback got engaged last night to his longtime girlfriend so congrats to both of them. Joe Burrow, not available for comment, but don’t worry, Trevor, daddy is proud of you. Go Tigers.”

Nothing better than seeing your son take the next step as a man.

There’s something about local news station sports departments taking things just a little bit further than a national sports show would that just never gets old. This is simply a masterful troll job from Mr. Trent.

Lawrence did fire back at Trent on Twitter before ultimately deleting a tweet quoting the video that read “Haha I love when grown men try this hard to talk about me.”