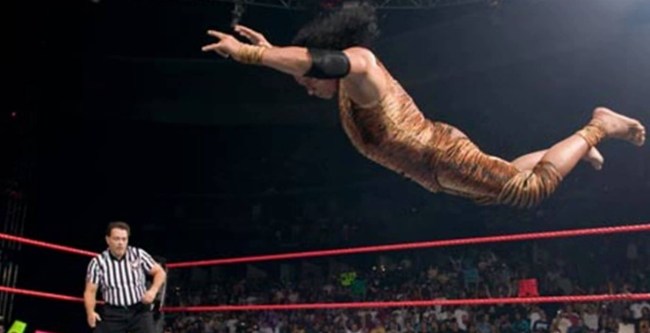 Jimmy “Superfly” Snuka is flying off the top rope in heaven after dying on Sunday at the age of 73.

It was reported back in December that Snuka was battling cancer and was living in hospice care and told he only had 6 months to live.

Former wrestler Dwayne “The Rock” Johnson announced the death of the high-flying WWE Hall of Famer on behalf of Snuka’s family.

Our family @TaminaSnuka asked me to share the sad news that her dad Jimmy Snuka has just passed away. Alofa atu i le aiga atoa. #RIPSuperfly

Snuka’s family did not immediately release his cause of death.

“Snuka is regarded by many as the pioneer of high-flying offense because of his Superfly Splash from the top turnbuckle,” the WWE said in a statement.

His death comes only a few days after he was acquitted for the 1983 murder of his mistress.

Snuka, born James Reiher, grew up in Hawaii and became a professional wrestler in the 1970s. He made his first World Wrestling Federation appearance in 1982. Snuka became a legend for the WWF thanks to his famed signature move “Superfly Splash,” where he vaulted off the rope and landed face-down on his opponent who was laying on the mat.

Wrestling stars had an outpouring of tributes to Superfly.

Certain individuals take our industry to new heights. He was one of them. Thinking of the Snuka family tonight. #RIPSuperfly pic.twitter.com/QXawuVLoaS

So sorry to learn of the passing of the legendary Jimmy Snuka. His career had such a huge impact on my life. pic.twitter.com/I4JZP7XICJ

Sad to hear about the passing of Jimmy Snuka. My heart and prayers go out to his family. Rest easy uce. Gods got you now. #RIPSuperfly

When asked how he was doing, the late Jimmy Snuka would smile and often say, "Lovely, Bruddah." #RIPSuperfly

GOD BLESS JIMMY SNUKA. HE WILL FLY ALL THE WAY TO HEAVEN. WHAT A SWEET MAN. LOVE YOU BROTHER!!!!

#RIPSuperfly one of the greatest icons in the history of our business. Sending our love and prayers to the entire family. https://t.co/AxmHKYrDj8

One of the most iconic photos in wrestling. Before high risk was high fashion. Jimmy Snuka captured the imagination of us all. pic.twitter.com/1o1M3UBMpN

Rest in heaven Jimmy Snuka! Sending my condolences and love to the Snuka family🙏🏻

Jimmy Snuka was my 1st favourite wrestler, I love him & his family, so many great conversations w him that I'll treasure 4ever #superfly

In a time when veteran wrestlers wouldn't help younger talent
Jimmy Snuka had no problem,helping me
Fly Superfly
I Love You
Wonderful Brudda pic.twitter.com/cdEm6huIJu