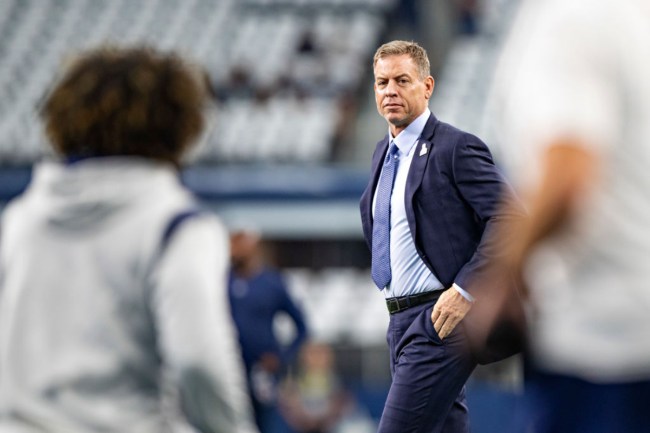 This past weekend wasn’t too kind to Troy Aikman. Not only was he upset that he didn’t get to call the Cowboys-49ers game, but he also had to witness Dallas get bounced from the playoffs in a sad, dramatic fashion.

Even three days removed from the Cowboys’ loss, Aikman is still frustrated about how things played out for his former team.

During an appearance on 96.7 The Ticket, Aikman specifically made a point about the usage, or lack thereof, of wide receiver CeeDee Lamb. Lamb only hauled in one catch on five targets for 21 yards against San Francisco.

Aikman is convinced that Dallas’ coaching staff was too focused in on specific schemes and didn’t show the ability to change things up. He made it clear that Lamb should have gotten way more looks and said that if he were playing in that game and the coverage was giving Michael Irvin those looks, he would’ve finished the game with a minimum of 10 catches.

“There was a lot of single coverage on CeeDee Lamb,” Aikman began, according to Jon Machota of The Athletic.

“I hate going back to (when I was playing) because nobody cares, but what I see around the league, it’s not just Dallas, I’ve seen it with a lot of teams, a lot of these offenses want to scheme things. The coordinators, it’s all about scheme… Michael Irvin would’ve had 10 catches at halftime if they played us the way they played CeeDee Lamb in that game…The game is not that difficult.”

Getting Lamb the ball more often would have certainly made a difference in the game, but Dallas cleaning up its penalties would’ve made things a bit easier as well.