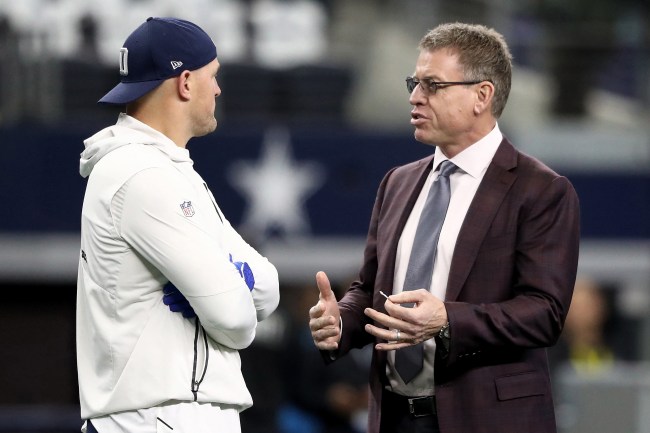 Troy Aikman is best remembered for leading the Dallas Cowboys to three Super Bowl titles during the ’90s — which all but solidified the quarterback as a Hall of Famer — but the lifetime Cowboys player nearly suited up for another team prior to walking away from the NFL for good. And, as you can tell by the headline above, Aikman narrowly signed with the then San Diego Chargers, in a move that, ultimately, fell through for a pretty strange reason.

According to a recent piece in the Los Angeles Times, after the Cowboys released Troy Aikman following the 2000 NFL season, the signal-caller only had his eyes on the Chargers as a possible destination — as the former UCLA Bruins standout initially eyed the SoCal franchise in 1989 when he was entering the league as the No. 1 overall pick. Speaking with the Times‘ Sam Farmer, here’s how Aikman described how he nearly ended up going from the Cowboys to the Chargers 20 years ago.

The only two teams I wanted to play for coming out of UCLA were the Chargers and the Cowboys. The Chargers when I was coming out, they had the eighth pick and they took Burt Grossman, a defensive end from Pittsburgh. Dan Henning was San Diego’s head coach, and we had agreed to a bigger contract actually than what I was getting from the Cowboys.

But in order to get to the Chargers, there were seven teams that were going to have to not select me. So it was a real longshot, and the Cowboys were not going to trade the pick, and they wound up taking me first overall.

I thought I was going to play in San Diego after Dallas. The motivation behind that was Norv Turner, my offensive coordinator in Dallas who went on to the same job under Mike Riley with the Chargers.

With the chips falling just right for Troy Aikman to sign with the Chargers — as the quarterback knew the Cowboys were set to release him — he began his free agent trip to the Chargers, meeting with everyone except the team’s new general manager, John Butler, who had recently come to San Diego from the Buffalo Bills. Leading up to that point, as Aikman put it, he told Turner he was ready to sign, saying, “‘You know, you’re right. I want to come here and play.’ I was excited about it.”

Norv thought I was going to be offered a contract, but Butler had other plans. He was looking at Doug Flutie or Rob Johnson, whichever one Buffalo was going to cut. Buffalo wound up keeping Johnson.

Flutie gets released, and the next morning I get a call from Norv. I was in Santa Barbara and he says, “You’re not going to believe this, but we just signed Doug Flutie.” And I said, “Well, OK, that makes the decision easy for me. I’ll retire.” So I did.

And, just like that, Troy Aikman’s NFL career was over and he was headed to the booth for FOX Sports… but there was still opportunity and some temptation for a return, as the current TV analyst described a number of other scenarios that nearly brought him back to the league.

A year later, I was working for FOX and in San Diego in the booth. We did a game break in the second quarter saying Donovan McNabb was hurt in Philadelphia. It looked like he might have broken his ankle. All of a sudden, a producer says in my ear, “Hey, I need you to call somebody at halftime.” I said, “What?” He had never done that. He gave me a number and said, “It’s Andy Reid,” who was coach of the Eagles.

I stepped out of the booth and called Andy, and he explained the situation. He said, “Hey, we’re playing in San Francisco on Monday night, and you’ll be the starter.” I said, “Andy, I haven’t played in two years.” He says, “You’ll be all right.”

I told him I didn’t even know the offense, and he says, “That’s OK. Same concepts. We’ll make it work. You’ll be fine.”

I told him I’d call him after the game, and we had a lot of time to talk because I was driving up to my home in Santa Barbara. I told Andy I’d like to sleep on it and that I’d call him the next day. So I went to bed that night and said, “I can wake up tomorrow and spend a nice couple of days in Santa Barbara. Or, I can be in frigid Philadelphia getting my brains kicked in.”

Hey, you can’t argue with Aikman’s decision to turn down blistery Philly for the warm weather of Southern California, where he was avoiding 300-pound lineman chasing him around. And, while the Eagles tried to tempt him, so, too, did the Miami Dolphins at one point — which, obviously, Troy Aikman decided not to pursue.

In an offseason where we could see Tom Brady move from the Patriots to another team, Troy Aikman’s story above proves that, while we prefer iconic athletes only play for one franchise, there’s always temptation to go elsewhere if that burning desire to still compete is in them.

You can read the full story and details over on Los Angeles Times‘ website.