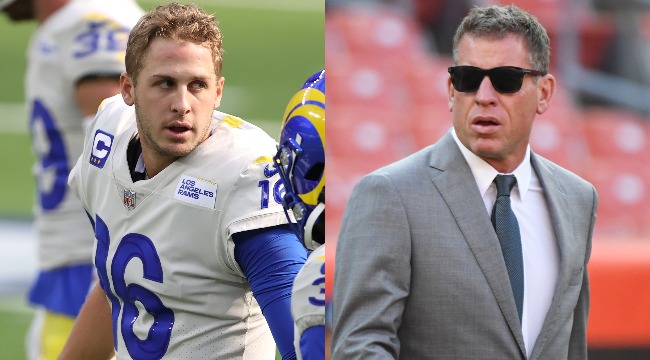 The NFL is a fickle beast, folks. Seems like just yesterday Jared Goff punched his ticket to two straight Pro Bowls, the franchise’s first Super Bowl appearance in 17 years, all on the back of a four-year, $134 million contract extension he inked in 2016.

Now, Troy Aikman can’t even utter Goff’s name without calling for him to be publicly flogged for his poor play.

After a Week 16 interception against the Seahawks:

“It just doesn’t get any uglier than that.”

Ok, maybe Troy wasn’t being hyperbolic. This was bad.

#Seahawks ball ‼️@qdiggs6 gets a huge interception on Jared Goff, his fifth of the season!

Michael Silver of NFL.com published a story detailing the nuances of the Goff’s unceremonious departure from Los Angeles, citing Aikman’s ongoing criticism of Goff as a potential reflection of Sean McVay’s opinions of the former number one pick.

Routinely trashed this season on FOX telecasts, specifically those with Troy Aikman as the lead analyst, Goff could reasonably assume that McVay’s words about his quarterback’s play in network production meetings were far from glowing.

Before a Week 12 game against New England:

There is no shortage of ass quarterbacks in the NFL, and while Goff is no Uncle Rico, Aikman’s constant naked criticism of Goff leads me to believe that he forgot Sam Darnold was in the league.

Aikman feels almost uncomfortable giving credit to Jared Goff for literally not missing a snap after popping his thumb back into place. Can’t understand his disdain for him. So bizarre.

Aikman: That was a perfect pass,

Aikman: That was a terrible pass

Regardless of whether McVay was backing over his starting quarterback with a proverbial Ford F-150 in production meetings, the 26-year-old has found a team that won’t treat him like the kid with the cold sore in the blunt circle when he has a bad stretch. That’s a win, despite what Troy has to say about it.

“Unlike Michael Silver, I strive to be fair and balanced and do not have an agenda when doing my job. The record will show that I have been a strong supporter of Jared Goff’s over the years. Unfortunately for the Los Angeles Rams and Jared Goff, he did not perform at his best in the games that I broadcasted this season and I’m confident Jared would be the first to agree.”