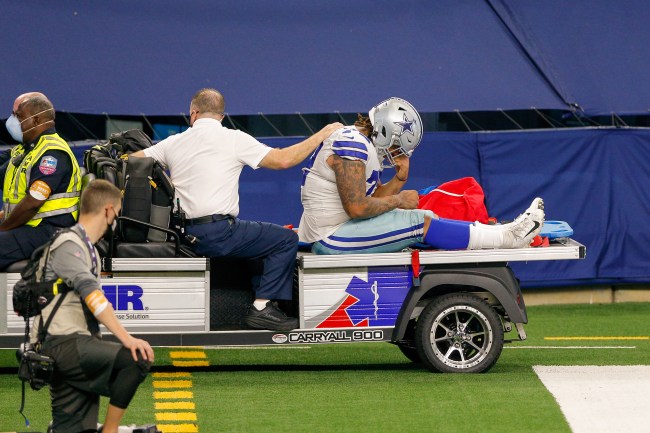 The NFL can be a cruel place, and, unfortunately, Dallas Cowboys defensive lineman Trysten Hill may have just found that out the hard way. While “America’s Team” lost starting quarterback Dak Prescott to a gruesome ankle injury, another player who went down was Hill, who was carted off the field after injuring his knee during the Week 5 contest against the Giants. It means yet another Dallas starter finds himself on injured reserve. Ouch.

Although the team isn’t certain with the extent or severity of Hill’s knee injury, Todd Archer, an ESPN reporter who covers the Cowboys, reported the behemoth defender is believed to have suffered a torn ACL, meaning he’d be done for the rest of this season and, possibly, parts of next year, too.

Cowboys defensive tackle Trysten Hill is believed to have suffered a torn anterior cruciate ligament in his right knee in Sunday’s win against the New York Giants, according to multiple sources. He will have an MRI Tuesday morning. If the test confirms… https://t.co/0adoLpGrPo

Unless you’re a Dallas Cowboys fan, the injury news about Trysten Hill probably isn’t all that newsworthy. I mean, sure, the guy was a starter and a former second-round pick who was really starting to play well on the D-line, but it’s not like the dude’s at Aaron Donald’s stature or anything. That doesn’t diminish the fact that it’s a major blow for the Cowboys — but not for jackass NFL fans who mocked Hill after hearing the news on Twitter.

For those that may have already forgotten, Hill was the same play who, just a couple of weeks ago, made a dirty tackle on Seattle Seahawks running back Chris Carson, which was ripped by Seahawks players and coaches for being absolutely bullshit. Luckily, Carson escaped major injury, but that didn’t stop people from laying into the Dallas defender for breaking an unwritten rule as a defensive lineman, according to ESPN’s Marcus Spears.

Now, back to those jackass NFL fans, who were more than happy to mock Trysten Hill on Twitter after learning about the possibility of a torn ACL against the Giants. Given the dirty play on Carson just a couple of weeks ago, you better believe tons of people were willing to clap back at Hill, saying it’s karma that he ended up getting hurt. Just take a look below at what some were saying on social media.

How the turn tables

Hate seeing any injuries to any player, but at what point is this karma? Tried to end Chris Carson’s season by gator rolling and then got a targeting penalty the same drive against Russell Wilson.

what goes around comes around. don’t roll on peoples legs…

Proof that karma is a very real thing. I wonder if he will think twice before attempting to gator roll someone. That being said I would like to make it clear that I never wish harm among anyone. No matter the circumstances

Man.. I can’t lie I thought the same I just didn’t write it smh

You really hate seeing people actually celebrate another person getting injured, regardless of any dirty play he may have made in the past, but, you know, social media brings out the toughest of keyboard warriors. Whether Trysten Hill’s knee injury is proof that karma exists or, more likely, just a freak accident that unfortunately happened, the defender has a long road back towards recovery — and, hopefully, gets inspired by some of these morons who tweeted their happiness after the Dallas defender got carted off.