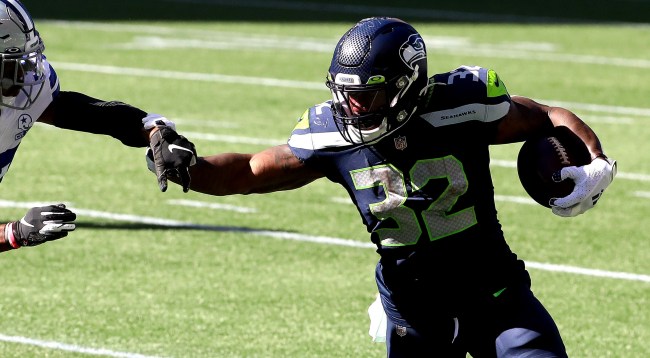 Pete Carroll is mad. Marcus Spears is mad. Everyone is mad at Dallas Cowboys defensive tackle Trysten Hill for his dirty gator roll of Seattle running back Chris Carson on Sunday.

Hill’s coach Mike McCarthy, however, is not one of them.

In fact, McCarthy, who many Cowboys fans already wanted to fire after week one, says he doesn’t even think Hill was trying to hurt Carson.

Hmmm… it certainly appears that he was trying to hurt him.

On Monday, McCarthy and Cowboys defensive coordinator Mike Nolan both said they didn’t think there was any malicious intent on Hill’s part.

“You see fundamentals – particularly early in the season, particularly this season – that we need to continue to work through and do a better job of,” McCarthy said. “I think he was just trying to wrap and roll, and the result of it occurred in an injury. By no means do we want to see players get hurt, especially when it’s unnecessary. But trust me, there was zero intent involved there.”

“Like when you tackle a quarterback, a gator roll – so to speak, as people call it – is something that you might do just to protect so you don’t just kind of flop on the quarterback,” he said.

“I know the player, and that’s first and foremost in my mind, and Trysten Hill is not a dirty player by any stretch of the imagination. He’s an excellent young man, and I don’t think he had any intention to hurt that player.”

Luckily for the Pete Carroll and the Seahawks the latest report says Carson’s knee injury as a result of Hill’s tackle is only a sprain and he might even be able to play this coming weekend versus the Dolphins.

Sigh of relief for the #Seahawks: An MRI confirmed RB Chris Carson’s ligaments are intact and it’s just a minor knee sprain, source said. In fact, he’s got a chance to be ready for this week’s game at Miami.