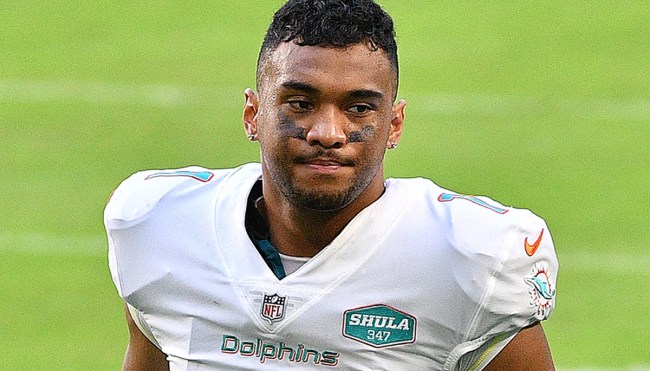 One of the biggest storylines of the NFL offseason concerns the explosive lawsuit Brian Flores filed in which he not only accused the Giants of conducting a sham interview but claimed Miami Dolphins owner Stephen Ross offered to pay him to lose games during the team’s 2019 campaign.

That development was largely overshadowed by (and could possibly help explain) another that left many NFL fans scratching their heads: the Dolphins opting to fire a guy who won eight of the last nine games he coached and helped the franchise record two consecutive winning seasons for the first time in close to 20 years.

Based on what has unfolded since the start of the new year, there’s a chance you might have totally forgotten about a report that suggested Flores and Tua Tagovailoa didn’t exactly see eye to eye and another that claimed he basically stopped interacting with his coaching staff when there was still more than a month remaining in the regular season.

Flores denied any such rift existed when he was asked about the supposed issue in February, but it’s fairly hard to believe that’s actually the case based on what Tagovailoa had to say when he addressed the matter during a press conference on Wednesday.

After a reporter floated the subject with the Dolphins quarterback, Tagovailoa described the inquiry as a “big question” before taking a few seconds to collect his thoughts and delivering an answer that would suggest he and Flores were not exactly the best of friends, saying “I’m very thankful that he drafted me to come here to play for the Miami Dolphins.”

It’s safe to say most fans who heard the comments didn’t have much trouble reading between the lines.

And told us EVERYTHING.

"I just feel like there are so many things that have happened. So many changes, and a lot of them good."

I think this will be Tua best year but I think it’s gonna be Jimmy g ish which is not good enough 🤷🏿‍♂️ and I don’t like the fact he keep throwing shade at Flores in a way, Flores is not out there throwing passes for him so he has to take responsibility also!

According to ESPN, the QB also managed to throw another jab Flores’ way when he praised Mike McDaniel and said the new head coach “doesn’t force you to be what you’re not,” so, yeah, it seems like there may have been some problems.