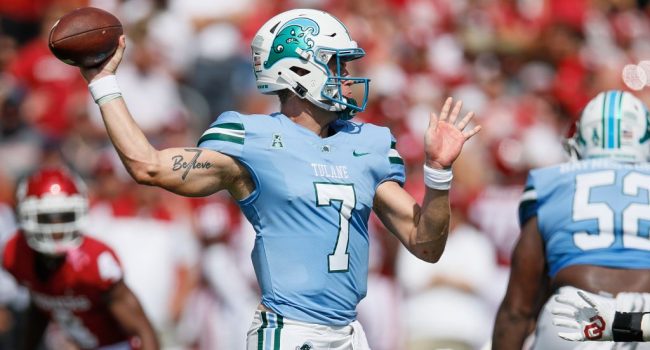 Tulane football is breaking out the retro helmets for its matchup against Ole Miss on Saturday. The Green Wave is turning back the clock and sporting absolutely perfect lids from their days in the SEC.

Tulane played in the Southeastern Conference from 1922 to 1965 and had one of the greatest mascots in college football for all but the last two years. The helmets feature “Greenie,” as well as a decal on their helmets making not that the school was SEC champs in 1934, ’39 and ’49.

This Saturday we are stepping back in time to our days in the SEC.

Greenie was first created by cartoonist John Chase in 1945. He lasted until 1963, when the university replaced him with a “determined looking Green Wave,” which is awesome in its own right.

However, it’s hard to top the mischievous boy in a football helmet.

Tulane enters this weekend with a 1-1 record after narrowly losing to top-5 Oklahoma to start the season after Hurricane Ida and destroying FCS program Morgan Sate last Saturday. Ole Miss is 2-0 and features one of the most high-potent offenses in the country, led by quarterback Matt Corral.

The Rebels and the Green Wave have somewhat of a rivalry that dates back to 1893. Because Tulane no longer competes in the SEC, it is a little bit less intense, however, the two fan bases know one another well and are a lot more alike than different.

Between 1919 and 1939, Tulane was on a 12-game winning streak against Ole Miss. However, the Mississippi bunch has won the last 11 games against the Louisiana opponents.

Lane Kiffin’s team is favored against the visitors, but if there was any worry before, it is certainly amplified by the “Greenie” helmets. They’re gorgeous.