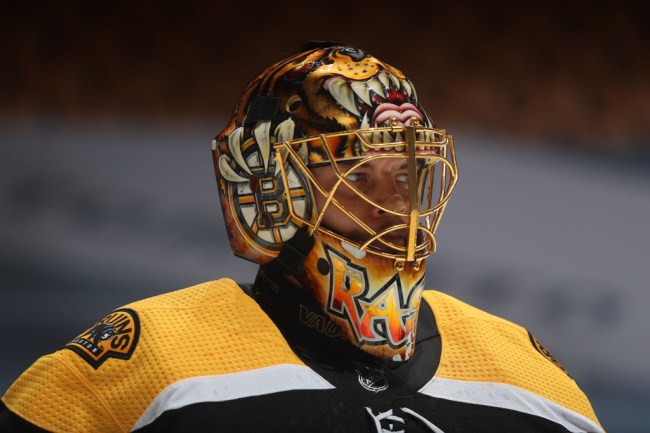 Since the NHL resumed play inside its two bubbles in Edmonton and Toronto, things have been exciting from a viewer’s perspective. Sure, everyone is missing the aspect of the fan, especially as the playoffs get going, but the product hasn’t been lacking much of anything when it come to watching the broadcast from the couch.

The same can’t be said when it comes to the player’s experiences tho. Just like the fans miss going to games, players miss that playing environment that the fans create. Playing games, even if they’re playoff games, in an empty arena is certainly an adjustment for players.

While players won’t be quick to come out and straight up say ‘playing in the bubble stinks,’ that’s basically what Bruins goaltender Tuukka Rask explained to the media following his team’s 3-2 loss to the Hurricanes.

“To be honest with you it doesn’t feel like playoff hockey out there with no fans. It feels like an exhibition game…You’re obviously trying to play as hard as you can…but when you play in your home rink or away rink, there’s fans around and it creates a buzz around you. There’s none of that. It feels dull at times. There’s moments that there might be scrums or what not but then it’s five minutes and it’s coast-to-coast to hockey, it just feels like an exhibition game.”

Here are Tuukka Rask's full comments on the atmosphere up in Toronto: pic.twitter.com/5qQU4BDA3N

The majority of Boston fans out there likely won’t enjoy hearing those words from their goaltender, but you can’t blame Rask for speaking the truth. Everyone knows it, die-hard fans included, that these games can’t feel the same for players without a single fan in the arena.

Look for Bruins fans to immediately go after Rask, as per usual, if Boston gets bounced by Carolina following these comments suggesting he’s just not interested.