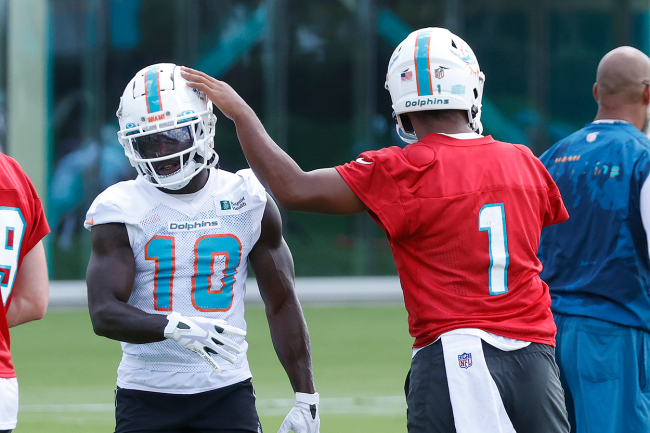 One of the biggest teams to watch in the NFL this fall is the Dolphins. After a 10-6 record in 2020 and a 9-8 record in 2021, there is a palpable buzz about what might be cooking in Miami.

A large part of that hype stems from one of the biggest moves of the offseason. At the end of March, the Dolphins acquired Tyreek Hill from the Kansas City Chiefs and gave the three-time All-Pro first-teamer a four-year contract extension worth up to $120 million.

Hill will lineup alongside Jaylen Waddle in an offense that is led by quarterback Tua Tagovailoa. Prior to training camp, Waddle joined Hill on his ‘It Needed To Be Said’ podcast.

During the episode, Hill called out Miami’s social media team for a video that it posted from OTAs. The video, which has since gone insanely viral, shows Tagovailoa completing a pass to Hill. It was one of the first looks at the new duo in action.

However, Tagovailoa’s ball was pretty significantly under-thrown and he got absolutely roasted. Hill reacted to the social media outpour and posted another video of his quarterback dropping a dime. Recently, the 28-year-old pass-catcher made a bold comparison that led to death threats.

Tyreek Hill also circled back on the video of Tagovailoa’s Terrible throw in his podcast with Waddle.

First and foremost, Hill proceeded to set the record straight about his quarterback.

“Reporters, analysts, Twitter trolls,” he said. “All those people are gonna take their words back on what they said about [Tua]. I’m gonna be sitting there, eating my popcorn.”

From there, Hill dropped his conspiracy theory and called out the social team. He said that he thinks they posted the bad throw on purpose to get the internet riled up.

“I really believe they showed that clip of Tua under throwing me just to get people talking,” Hill said. “Because they really know what Tua’s capable of, for real.”

It sounds like Hill is pretty confident in his quarterback. He thinks Tagovailoa is about to turn heads and only time will tell.

Here is the full podcast episode: