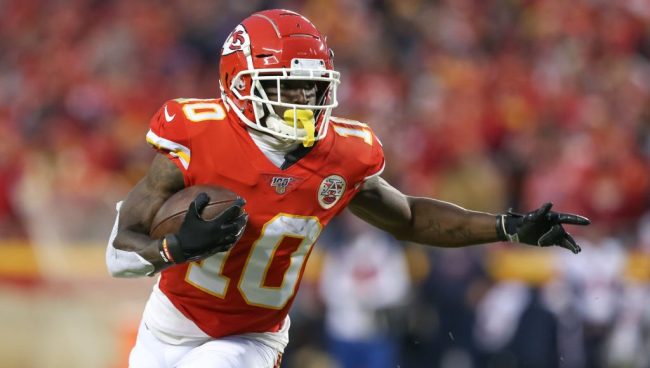 Kansas City Chiefs wide receiver Tyreek Hill claims to be one of the fastest people on the planet. As someone who ran a 4.29 40-yard-dash at his Pro Day in 2016 and consistently shows his athleticism both on and off of the field, he isn’t lying.

Look at him running track in high school:

Tyreek Hill ran a 20.94-second 200-meter dash in high school and it looked like he was jogging. Sheesh 💨 pic.twitter.com/NcanmJXiT7

The point is that Hill, also known by ‘Cheetah,’ has earned his nickname with freakish speed. Earlier this month he decided to go undercover as an older man to surprise unsuspecting passersby with his quickness.

He worked with a makeup artist to perfect the look and dressed in the spot-on old man outfit, cane and all.

Everything about his look was entirely believable and he brought it all together with a hilarious old man voice. Even if you know who he is, you wouldn’t have recognized him on the street.

After getting all done up in his finest gray beard, Hill took to the streets of Miami with influencer and TikToker Donald De La Haye (@deestroying) to challenge people to a race.

It’s unclear how many people took De La Haye up on the offer to “race his grandpa for $1,000, but at least one poor victim got dusted. A very, very confident woman challenged the undercover Hill.

She made it a solid 20 yards before falling flat on her face.

The race made for tremendous content and undercover athletes should be a thing more often.