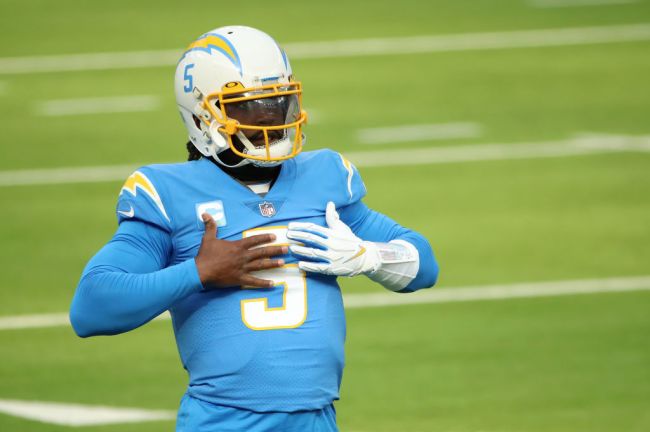 As the Deshaun Watson situation continues to unfold in Houston, Tyrod Taylor appears confident that he will be the team’s starting quarterback come Week 1. The 31-year-old NFL journeyman met with media for the first time on Thursday. He gave a pretty definitive answer to the idea that he will be under center when the Texans play the Jaguars on September 12.

“Deshaun has played at a very high level throughout his career. I’ve been a fan of his and I know him personally, but the opportunity to be able to start here is something I look forward to,” he said. “Looking forward to going out and competing with the guys that we have in our locker room. Brandin Cooks, Randall Cobb, Jordan Akins, David Johnson, Phillip Lindsay, Mark Ingram. All guys that I’ve admired from afar. Being able to be in the locker room with those guys and to go battle with those guys on Sundays is something that I’m looking forward to.”

This confident statement comes as Watson’s trade request remains intact. He was not at the team’s OTAs and has reportedly remained silent toward the team. That opens the door for Taylor to earn the starting job.

The Texans have four quarterbacks on their active roster. Jeff Driskel and third-round rookie Davis Mills round out the room. Behind Watson, who appears to be prepared not to play in 2021, Taylor is the most viable option. Driskel has made nine starts with three times as a career back-up, while Mills is considered a developmental prospect.

Thus, Taylor will likely be tapped should Watson not return to the team. Entering his 11th season in the league, Watson signed a one-year, $6 million deal that could be worth up to $12.5 million. He was supposed to be the starting quarterback for the Chargers last season, but he had his lung punctured during an injection from a team doctor and was ruled out. Justin Herbert took over and the rest is history.

For Houston to invest up to $12.5 million in Taylor was a clear sign that the team needed insurance for Watson. Now, with the lawsuits and police investigation against Watson, it is even more unlikely that he will play for the Texans again.

Taylor’s comments on Thursday only help to drive that point home. All signs allude to the former Pro Bowler (people forget) taking the first snap for Houston against Jacksonville.