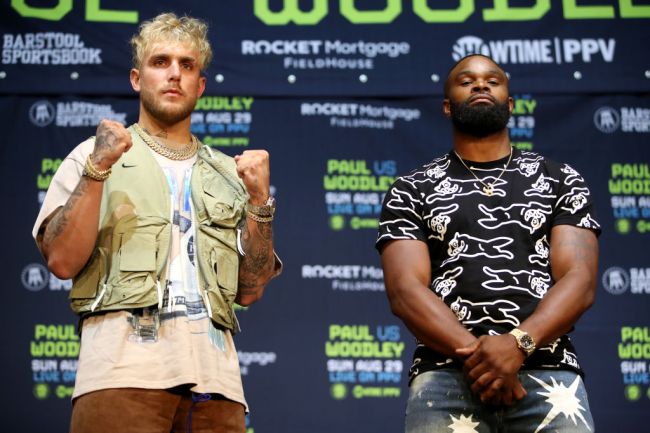 The stakes are high for this Sunday’s boxing match between Tyron Woodley and Jake Paul. However, a tattoo bet that was set between the two in July is now in question. We are here to set the record straight.

For Paul, he has a chance to prove that his boxing career is legit. The 24-year-old social media personality and YouTube star is 3-0 in his first three fights against YouTuber AnEson Gibb, former NBA player Nate Robinson and former MMA champion Ben Askren.

Woodley, on the other hand, has a lot to lose. He is a five-time UFC Welterweight champion who is making his debut in a boxing ring. Should he lose to a YouTuber, it would virtually end the 39-year-old’s career as a fighter.

Going back on a bet.

While the statistical, monetary and pride factors are key, there was another interesting wrinkle that is now up in the air. Back when the two met face-to-face for the first time in July, Paul pushed a tattoo bet on Woodley. They shook on it at the time, but Woodley was quick to backtrack during Thursday’s pre-fight presser.

Woodley claims that “there was no bet.” He said that he “did not hear a bet.”

Well, Mr. Chosen One, there was a bet and you did hear it. We have the video evidence to prove it.

Woodley agreed to the bet and everybody heard it. Now he’s trying to claim it never happened. Yikes.