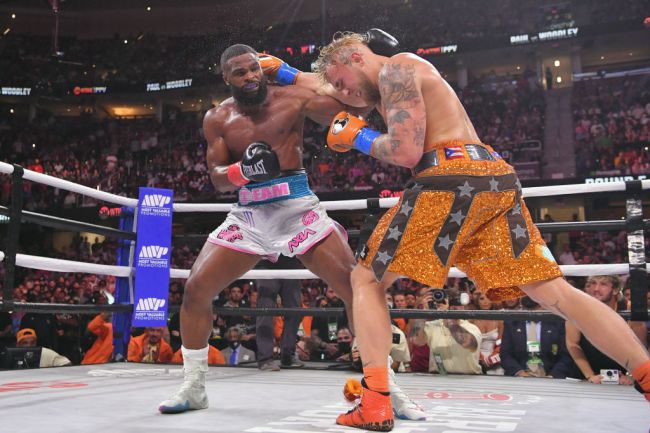 In the immediate aftermath of Jake Paul’s split decision victory over former UFC welterweight champion Tyron Woodley Sunday night, the 39-year-old Woodley laid out his case for a rematch.

Given a chance to respond in-ring, Logan Paul hopped in and said, ‘You’re old news, fam,’ appearing to shut the door on a rematch.

Jake then extended Woodley an olive branch (with a significant caveat) harkening back to a tattoo bet the two shook hands on back in July.

“Jake actually reached out to me and explained that there is a tattoo at stake at his fight,” said Flores. “The loser has to get the opponent’s winning name tattooed on them. I was mind blown because that’s something so permanent [and] there’s so much at stake here with this fight and this tattoo.

“The event is flying me to Cleveland and as soon as the fight is done, I am tattooing the loser.”

The artist created three designs, and Woodley can reportedly choose which he’d prefer and whether the tat will be in flashy colors or black and gray.

Tyron, coming from a guy who got a Kylie Jenner hip tattoo after losing a monthly traffic bet, I can tell you that while it’s debasing and humiliating at the time, after a year of ketamine therapy, you actually start to soften up to it. Stick in there.