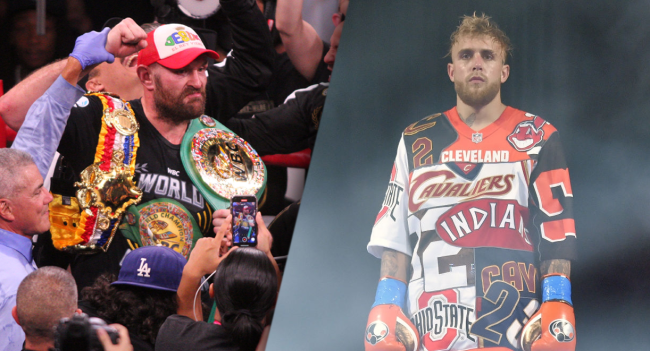 When the news broke that Tommy Fury would be dropping out of his upcoming fight against Jake Paul because of a respiratory infection and a broken rib, Jake and his brother Logan Paul went off on the heavyweight champion’s younger brother.

“Tyson, I just wanna let you know you’re a f—ing b–ch and so is your brother,” said Jake. “This is an embarrassment and hopefully, you guys can get that vaginitis cleared up super quick, you f—ing dosser.”

Logan Paul was no less kind to Tommy Fury, taking to Instagram to proclaim, “It’s a good thing you’re beautiful, you sexy blue-eyed beast, because you are a p—y.”

Related: Logan Paul Reveals Tyson Fury Offered To Fight Him But He Admitted He Was Too Scared To Face The Heavyweight Boxer

Never one to shy away from a war of words, Tommy Fury’s brother Tyson, the current WBC heavyweight champion, fired back in a profanity-laced rant directed at the Paul brothers.

“Jake Paul can go suck a d— for all I care. Next… p—y,” Tyson Fury told Behind the Gloves. “Him and his brother are sh-thouse p—ies and could never live in my world because they’re f—ing b–ches at the end of the day.

Jake Paul had also mentioned that he may not try to schedule another fight with Tommy Fury.

“I don’t know if I want to give him it anymore,” said Jake. “I might just leave him in the dust. This was the biggest opportunity of his life, so it might be a little cynical, but I think it’d be kinda fun to just not give him the chance again, and he’s gonna have to fight 20, 30 more times if he wants to get the same payday. So, good luck!”

When asked about that, Tyson Fury, when asked what he makes of that, replied succinctly, “I don’t make anything of it, let them do what they gotta do. No interest.”