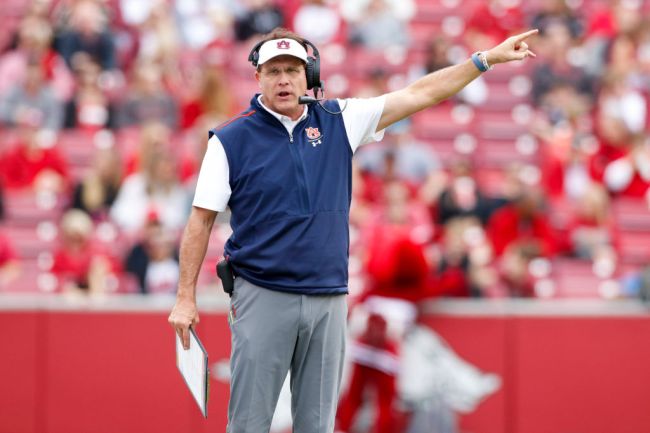 After head football coach Josh Heupel and athletic director Danny White both left UCF for Tennessee, the Golden Knights have been in a major transition period, but have reportedly set their sights on Gus Malzahn and offered him the head coaching job.

Jason Beede of 247 Sports was the first to report that UCF has offered the former Auburn head coach but noted it’s unclear at this time whether or not Malzahn will accept the offer.

Malzahn was immediately linked to the position after UCF hired Terry Mohajir as its new athletic director. Malzahn and Mohajir worked together during their time at Arkansas State.

Mohajir confirmed his intention last week to “act quickly” on the coaching search and shortened his list to a couple of candidates with Malzahn being a primary target.

“As soon as this day is over, I’m going to go dark and I won’t probably talk to the media, won’t respond… That’s all I’m going to do, bury myself in the next two or three days to do a lot of research, to look at a lot of videos, probably watch some tape or film, and kind of narrow down the candidates,” Mohajir told media members last Tuesday.

Malzahn was fired by Auburn in December after leading the Tigers to a 68-35 overall record during his eight seasons at the helm. Auburn went 6-4 in his last season as head coach. Malzahn led Auburn to the 2013 BCS National Championship Game in 2013 where Jameis Winston and Florida State spoiled their party. He also led the Tigers to a New Year’s Six Bowl in 2018 where they lost to UCF.

The 55-year-old would be a strong hire for UCF given his impressive resume and coaching in the strongest conference in the nation. While Malzahn wouldn’t necessarily be the flashiest of hires, he could continue to push UCF and keep the Golden Knights in the conversation as one of the best non Power Five programs in all of college football.