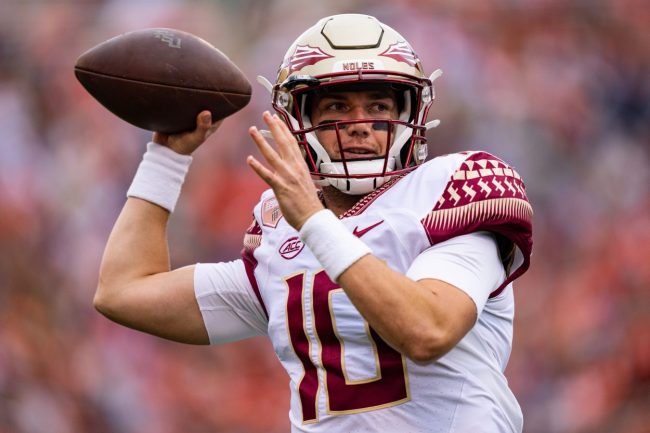 McKenzie Milton is one of the best stories in sports this year that hasn’t received the recognition he deserves. The 24-year-old Hawaii-native will play his last collegiate game at the Hula Bowl on January 15th and it will come with a special twist.

Milton, who has played at both Central Florida and Florida State in the past five years, will be wearing a unique custom helmet. All of the players at the Hula Bowl will wear their respective school’s helmets during the game.

Milton’s, however, will be brandished with the decals of both schools. He will be repping both the Seminoles and Knights as his college career comes to a close.

Milton began his career at Central Florida. As a freshman, he threw for 1,983 yards and 10 touchdowns.

During his sophomore year, Milton led one of the greatest seasons in Group of Five history. The Knights finished a perfect 13-0 and capped the year with a New Year’s Six Bowl win over Auburn.

The 5-foot-11, 185-pound quarterback threw for 4,037 yards and 37 touchdowns in the process. It was an incredible year for him and his team.

As a junior in 2018, the momentum continued. He threw for 2,663 yards and 25 touchdowns in 10.5 games while keeping the undefeated record.

However, during the third quarter of UCF’s game against South Florida on November 23, 2018, Milton’s career and life came to a massive halt.

He suffered a catastrophic knee injury and was rushed to the hospital.

After multiple surgeries, Milton had to re-learn how to walk before even considering the idea of playing football again. Although there were doubts along the way, he persevered.

Upon his return to football, Milton transferred to Florida State for his final season of eligibility. During the 2021 season he appeared in six games and threw for 775 yards and three touchdowns.

Now he has his eyes set on the NFL. To do so, he will showcase his skills with one final game in the stadium where it all began— UCF’s Bounce House.

Some things are bigger than sports and Milton’s helmet, although it may seem like just a helmet, is one of those things.