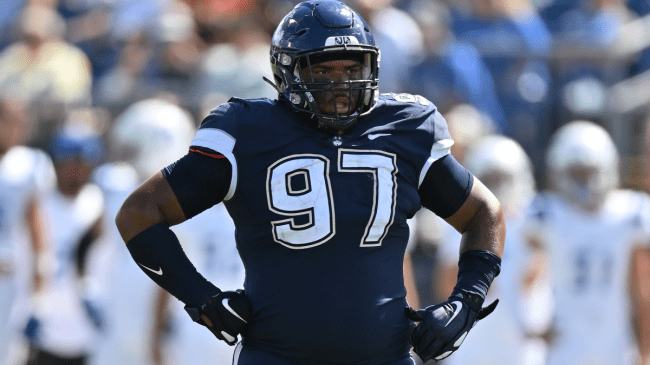 The UCONN football team has dealt with a plethora of injuries at the running back position this season. The team has already lost 12 players to potentially season-ending injuries and we’re just through four games.

Making things worse, two of those players play the same position, and a third is dealing with a shoulder issue ahead of their Week 5 matchup.

Leading rushers Nate Carter and Brian Brewton are out of action, while third-stringer Devontae Houston is playing in pain, making his status for Saturday’s contest against Fresno State uncertain.

Head coach Jim Mora said on Tuesday that the team is searching for help at the position.

“We look at our roster and ask, ‘Who on our roster, no matter what position, has played running back and could play running back?’ We are searching high and low for guys.”

The search appears to be getting so dire they’re looking at making a drastic move to bolster that RB room.

Joe Arruda covers the UCONN football and basketball programs for the Hartford Courant. He sat in on Jim Mora’s press conference ahead of the Fresno State matchup and took away a funny tidbit from the head coach.

The UConn football roster is so thin at running back Mora said the staff considered 6-foot, 300-pound defensive lineman Jelani Stafford to play the position. Stafford played some RB in high school and was “pretty darn good.”

Not the ideal situation, though it does look like Stafford was a productive runner in his high school playing days. Not a bad highlight reel for a 265-LB senior.

Now, Mora did close by saying he probably didn’t “want to put him there,” but with the way things are unfolding in the UCONN RB room, it’s always good to have a back-up plan.