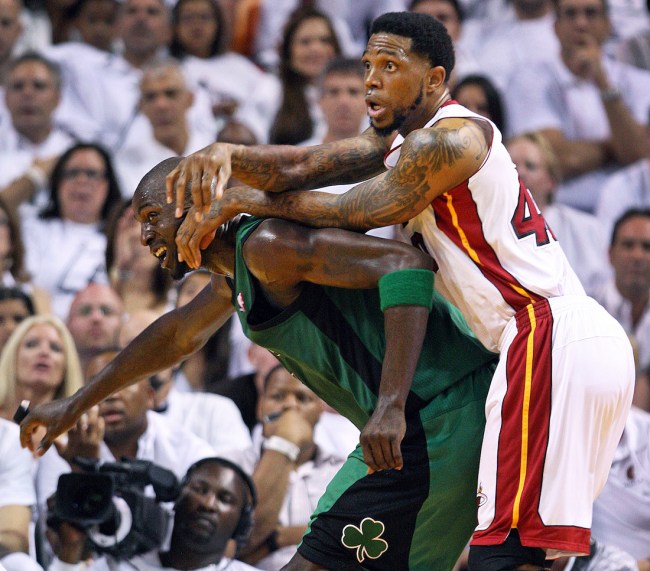 Udonis Haslem had some incredible matchups with Kevin Garnett during their days battling in the post during NBA games. While both guys got theirs — with each having at least one championship ring — and KG hasn’t played in the league for the past few years, the bad blood between the two doesn’t seem to have fizzled out at all.

Given the fact that Haslem has played against some of the league’s all-time greats throughout his 17-year career, he knows a thing or two about staying mentally tough when competing against the best. But when going toe-to-toe with Kevin Garnett, the Miami Heat icon says he wasn’t impressed with his toughness, and even claims KG did nothing more than use disrespectful trash-talk to try to get into the heads of his opponents. Take a look below at Haslem’s proclamation.

Udonis Haslem asked about Kobe, Duncan, & Garnett going into the HOF next week. UD does not think tough guy should be used to describe KG:2 of those guys I would consider mentally tough and one of those guys does a whole lot of talking…don't be loosely throwing around tough guy pic.twitter.com/oWdsi5rgNR

Kevin Garnett’s trash-talk is considered to be some of the most lethal in NBA history, so, whether Udonis Haslem agrees with the method or not, it proved effective for the Hall of Famer. Still, with legendary stories about KG ruthlessly going at opponents, it’s clear Haslem doesn’t consider the strategy to be tough, and, instead, slams Garnett for basically being a bully; give or take.

Haslem and Garnett had some awesome battles on the hardwood, but, even off of it, appear to still be going at it. The rivalry between the two appears to still be very real.