UFC 238 FIGHT WEEK: Tuivasa And Ivanov Will Slug It Out, But Will ‘Bam Bam’ Crush A Shoey After The Fight? 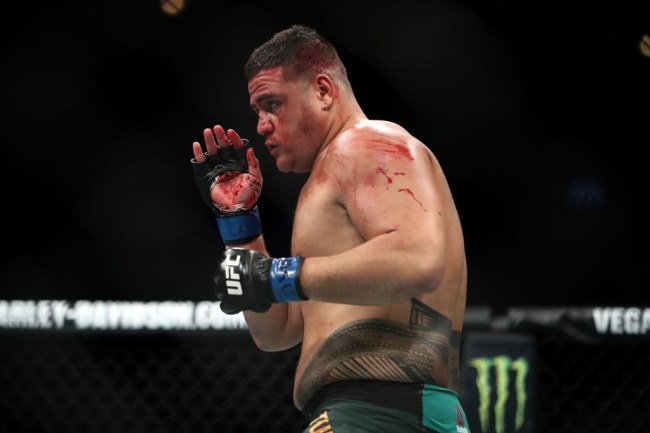 Only in Australia could drinking a shoe full of booze, topped with a dash spit, be the perfect celebration after a hard-fought MMA battle. It’s a tradition unlike any other in sports, but when Tai “Bam Bam” Tuivasa hits the Octagon, a “shoey” is never too far away.

Competing on the UFC 238 Pay Per View main card on ESPN+, Tuivasa is set to meet Sambo specialist Blagoy Ivanov in a battle of top-15 heavyweights. Fans will tune in for the mixed martial arts action, but what everyone really wants to see is if Tuivasa will grab some unsuspecting fan’s shoe after the June 8 contest and power down a healthy helping of light beer and excess bodily fluid.

Of course, I jest. Tuivasa and Ivanov should provide enough action in this randomly intriguing heavyweight bout.

A product of the Australian MMA scene, Tuivasa enters UFC 238 on the heels of his first loss as a professional. The protege of UFC and Pride legend Mark Hunt, Tuivasa has a very similar game as his mentor: strike hard, strike first, no mercy. Wait, isn’t that Cobra Kai?

Tuivasa, who is still just 26 years old, possesses power in droves. I mean, he needs to cut weight to get down to the heavyweight limit of 265 pounds, so you can understand where that power comes from, but “Bam Bam” is really just finding his way in the world of mixed martial arts, and already, he’s headlined a card in Australia, earned a Performance of the Night bonus, and defeated former UFC champion Andrei Arlovski. It’s a rather impressive resume for such a young dude, and yet all anyone wants to talk about is drinking beer out of a dirty shoe.

Standing opposite Tuivasa at the United Center in Chicago will be Ivanov, a silent assassin, almost a demon of sorts, fighting out of Sofia, Bulgaria. Do you realize how hard you have to be to make it out of Sofia, Bulgaria and into the international circuit? You certainly don’t have time to drink beers out your shoes. That is if you have beers and shoes.

Perhaps not the most well-known fighter on the scene, Ivanov actually has an amazing story, and it has nothing to do with the fact that he’s only 5’11” and fights at heavyweight.

Having once beaten Fedor Emelianenko in a Sambo match (you read that right, Ivanov beat Fedor at his own sport), Ivanov, who was also the 2008 Sambo world champion, was involved in a near-fatal stabbing in 2012, knifed down by a well-known Bulgarian criminal in a bar. Briefly, in a coma, Ivanov was hospitalized for months, barely clinging to life. Eighteen months later he was back to fighting, choking bros out with ease.

Clearly, there’s no reason to question Ivanov’s toughness. He might literally be the toughest man in the UFC, but if Tai Tuivasa challenges him to drink beer from a shoe at UFC 238, will Ivanov accept? And will that “shoey” be broadcast live on the UFC 238 Pay Per View the main card on ESPN+?

Those are questions that can only be answered on June 8, after this pair of heavyweights slug it out inside the Octagon. And considering these fellas are tipping the scale near the 260 mark, there’s always a good chance that this one will end quickly, either by Tuivasa’s sledgehammer of a right hand and those vicious elbows, or Ivanov’s crafty and underrated submission game.