UFC 238 Preview: What Will It Take For Tatiana Suarez To Earn The Next Strawweight Title Shot? 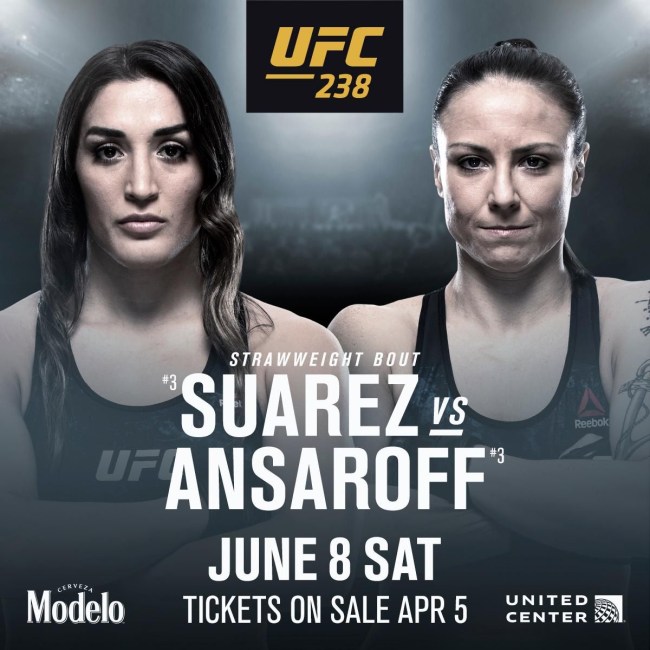 Actions speak louder than words. It’s an adage old as time itself and a motto of sorts for UFC strawweight Tatiana Suarez.

Never big on the trash talk, not one to resort to uncouth behavior to gain attention, Suarez, who headlines the UFC 238 prelims against Nina Ansaroff, just before the Pay Per View main card on ESPN+, has always used her performances in the Octagon to help her climb the ranks and earn distinction among fans and critics alike. But now that she’s almost at the mountaintop, just on the cusp of realizing her full potential as as UFC champion, it may be time for her mouth to catch up to her world-class wrestling game and dominant submission skills.

“I just want to put on a good performance that will speak volumes,” explains Suarez, just days before her UFC 238 bout against Nina Ansaroff. “I think I’ll have a dominant performance and I just have to go and do it now … my skill, it really speaks for itself.”

Much like MMA fighters like Jon Jones, Max Holloway, Cody Garbrandt, Anthony Pettis, Chris Weidman, and Dustin Poirier, Suarez was pegged as a future star long before she ever stepped foot inside the Octagon. A future champ she was called, constantly, during her run through The Ultimate Fighter, and almost three years into her UFC career she’s looked every bit the part, thoroughly thrashing every woman she’s faced. Still, despite a 7-0 undefeated record, with three finishes inside the Octagon, it remains unclear if Suarez will get the next crack at current UFC strawweight champion Jessica Andrade.

With a logjam of contenders all vying for the next shot at the 115-pound title, Suarez is in need of an emblematic finish at UFC 238. Suarez, who is up against other potential contenders like Michelle Waterson, Rose Namajunas, and Ansaroff, must distinguish herself from the pack and deliver a symbolic performance at UFC 238 to make her case for a championship fight.

The latest UFC fighter to land an endorsement deal with Modelo, Suarez is pretty sure she knows how to get it done on June 8.

Sometimes, you get your #FightingSpirit outside the Octagon.

For @TSPMMA115, her family gives her the strength as she makes a path to the belt. @ModeloUSA pic.twitter.com/LQrUVnkze4

“I find everybody dangerous. Whether they are on a five fight winning streak, or on a five fight losing streak. I take everybody seriously. The same. I think of them as the best in the world and they’re trying to take it from me,” comments Suarez. “But I’ve been around successful people and champions my entire life, so I’ve developed these tools over time, so I don’t need a current champion to show me what a champion needs to do in order to be a champion … I go in there with the intent of always making it an emphatic win.”

Examining Suarez, her story, and her resume, she’s an easy choice to represent the UFC on the championship level. A bronze medalist at the 2008 and 2010 wrestling world championships, Suarez was on the fast track to the London games when a bout with thyroid cancer cut her Olympic dreams short. Making a full recovery, she transitioned from wrestling to mixed martial arts, ascending to the pinnacle of MMA in near record time.

Less than two years into her pro career, Suarez was already in the UFC, and has used the three years since to power her way toward the top of the rankings, all the while using her platform to act as an advocate for cancer survivors. Still, she feels like a world championship is taking longer than initially expected.

“If it wasn’t for that stupid shoulder surgery, I would’ve already had the belt already,” adds Suarez, referring to an injury that kept her sidelined for 16 months after sweeping the competition on The Ultimate Fighter. “But everything happens for a reason and I think that … it made me stronger and a better athlete, so yeah, I feel very confident. I think I’ve had a good career so far, and I just want to continue to be dominant and put on great fights for the fans.”

So in love with fighting, so passionate about competition, and so committed to her domination of the UFC’s strawweights (and then flyweights, as she’s already hinted at an eventual move up a division), Suarez has stated that she’s even willing to continue taking out opponents should the UFC opt for a different challenger for Andrade’s next title defense.

After so much lost time, she’d just prefer not to have to wait any longer.

So tune in to the UFC 238 prelims on June 8 to see if Tatiana Suarez can get the job done and earn a title shot. It’s the perfect appetizer to the UFC 238 Pay Per View main card on ESPN+.