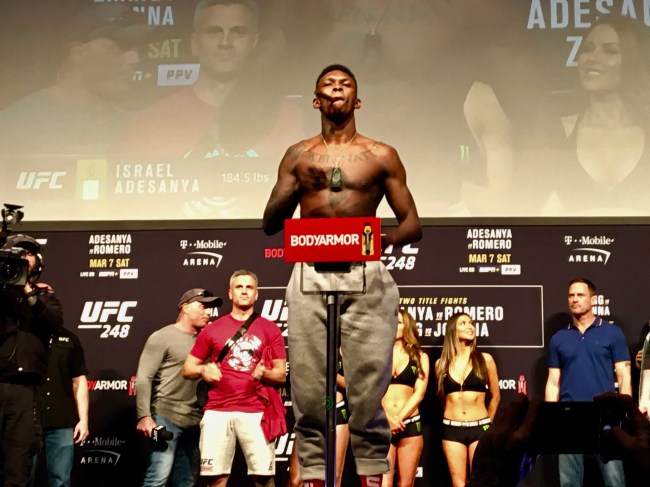 Can Stylebender defend the belt against one of his most formidable challengers? Tonight we find out by tuning into UFC 248 stream, only on ESPN+.

Both fighters have soaring stock in the MMA world, earning rabid fan allegiances. Our own Dan Shapiro notes that tonight’s UFC PPV is “the perfect fight for new MMA fans.”

Israel Adesanya is on a monumental trajectory at the moment – undefeated in his 18 UFC fights, most recently with a clean KO against Robert Whittaker in round two at UFC 243.

Romero is a +235 underdog against at UFC 248 tonight. As our Dan Shapiro notes, Romero is “always scary and always dangerous, and he’s been in enough big five-round fights” so you can’t rule him out.

Step 1: The UFC has a deal with ESPN to stream UFC PPVs on ESPN+. It’s easy to sign up for an ESPN+ account so you can watch UFC 248, with Adesanya vs Romero in the main event. After you buy the fight on your phone or computer via ESPN+, you can live stream UFC 248 on your TV via a variety of ways. More on that below.

First, you have to be an ESPN+ subscriber to watch the UFC 248 stream.

It’s very easy to sign-up for ESPN+ AND buy tonight’s PPV in the same session on your phone or computer. All you have to do is sign up for ESPN+ here.

And if you’re wondering what is ESPN Plus, here are those details.

It’s easy! First, log-in to your ESPN Plus account. Second, all you have to do to buy the PPV is go to the ESPN+ UFC landing page (right here). It says “Exclusively for ESPN+ Subscribers – Only $64.99” then hit the yellow Buy Now button.

At that point, all you have to do is complete the instructions to buy tonight’s UFC 248 PPV. 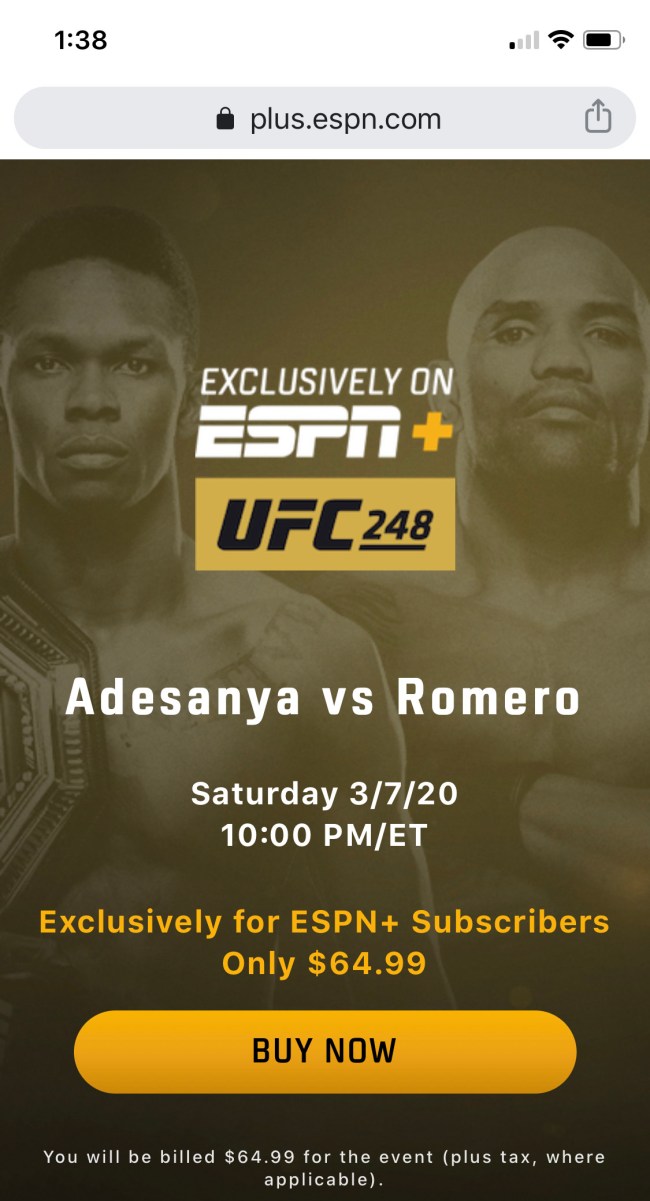 Now that you have ESPN Plus and you bought the UFC 248 PPV, it’s time to tune-in. Here’s how you watch the UFC 248 stream on a number of devices, including the following:

All you have to do is sign into your ESPN+ account that you bought the PPV with. Then you’re all set to stream UFC 248 via the ESPN+ PPV.

Big, big fight card tonight. Israel Adesanya is on the cusp of total world domination at UFC 248, but first he’ll have to sneak by Yoel Romero, the scariest athlete who ever stepped into the Octagon.

There’s a lot riding on tonight’s UFC 248 main event for both fighters, but with a win, Adesanya could very well cement his place as the next great UFC superstar. Think. We could, quite possibly, be entering the Adesanya era, and staying there for quite some time. Adesanya has shown some of the most brilliant and creative striking inside the Octagon. He’s an artiste, but Romero is a steep, steep task for his first title shot.

For Romero, this fight is all about redemption after several failed attempts at the title. Tonight, at nearly 43 years of age, he could finally win a UFC belt.

In the UFC 248 co-main event, strawweight champion Zhang Weili puts her belt on the line for the first time. It’s a major moment in her run as the UFC’s first Chinese champion. Her title defense against Joanna Jędrzejczyk is expected to be viewed by record audiences in China, where citizens have been advised to stick to indoor activities due to the Coronavirus. But think about that. Zhang Weili is carrying the weight of the world’s most populous nation on her shoulders amid a global pandemic. It’s a big, big deal. And who knows, with a win she could even demand a hometown Beijing card for her next title defense.

For Joanna Jędrzejczyk, UFC 248 is probably her last shot at a UFC belt. The former champion dominated the division for years, but with so many viable contenders waiting in the wings, this very well may be Jędrzejczyk’s last chance to reclaim the title she held from 2015-2017. 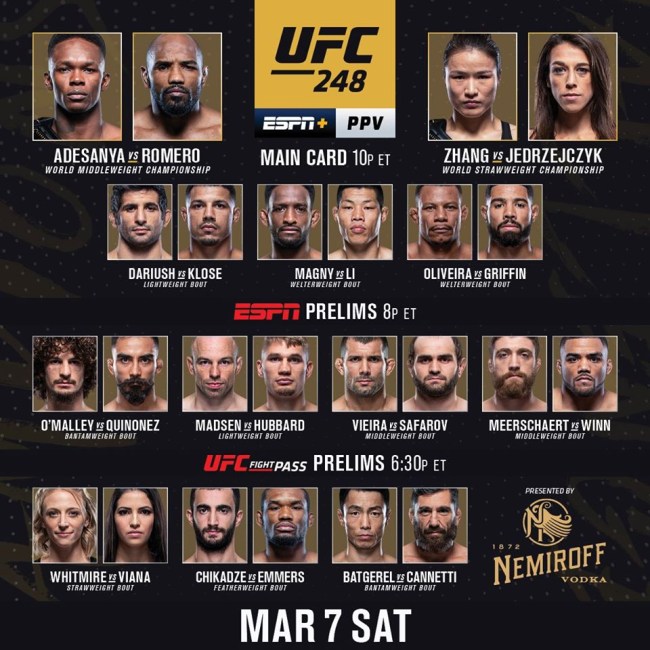 If you’re an MMA fan, you don’t want to miss this fight.