UFC 252 Preview: Honestly, How Is Unsung Champ Stipe Miocic Not Already Considered the Greatest UFC Heavyweight of All Time? 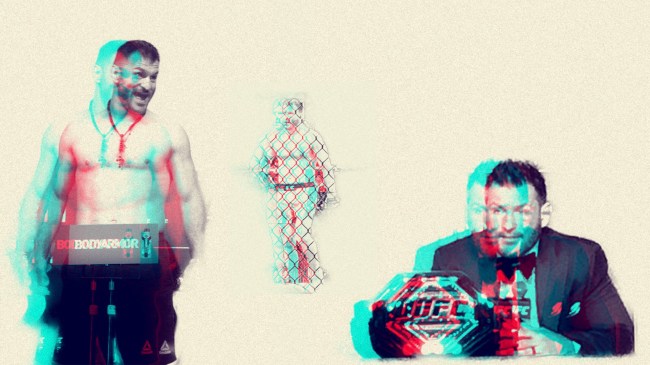 We get it. Every fight needs a hook, an edge, a story, something else to draw viewers in and drum up interest.

For UFC 252: Miocic vs. Cormier 3, which goes down on Saturday, August 15 on ESPN+ PPV (10 p.m. EST / 7 p.m. PST), much of the pre-fight talk has been about how the winner of the main event between UFC heavyweight champion Stipe Miocic and former champ champ Daniel Cormier will henceforth be known as the greatest UFC heavyweight to ever step foot inside the Octagon.

The wording of the distinction is carefully crafted to exclude non-UFC great Fedor Emelianenko, but still, how are we even still debating that Miocic isn’t currently the UFC heavyweight G.O.A.T.?

Perhaps pundits are quick to overlook Miocic because of his lackadaisical nonchalonce and laid back cool demeanor. Perhaps they’re quick to dismiss Stipe because he never really played the promotional game, preferring instead to hang in blue-collar Cleveland, Ohio, saving lives as a firefighter. But just look at his resume, and it’s pretty clear that Miocic has put together an exceptional, G.O.A.T.-worthy run.

Those title defenses, all coming against active heavyweights in the UFC top-7, only tell part of the story of Stipe Miocic’s career, one that includes a 13-3 record inside the Octagon, nine of those victories coming by way of knockout, four of which came against former UFC champions.

Blasting former UFC heavyweight champion Andrei Arlovski in early 2016 in less than a minute to earn his first UFC title shot, Miocic went to Brazil and snatched the belt from then-champ Fabricio Werdum, landing a picturesque punch square on the jaw of the charging opponent. Werdum instantly dropped to the canvas, earning Miocic the title. It was a classic, highlight reel KO.

Not long after, Miocic knocked out Junior dos Santos, another former UFC heavyweight champion, and a few years later, it was Cormier who felt the power of Miocic’s hands. In both cases, Stipe avenged losses he had already suffered against both dos Santos and Cormier, and avenging losses is a big part of the G.O.A.T. conversation.

Who leaves as the heavyweight 🐐?

Looking at UFC welterweight great Georges St-Pierre, who many consider the MMA G.O.A.T., one very specific factor in determining GSP’s place atop the mixed martial arts hierarchy is that he avenged his only two losses, finishing both Matt Hughes and Matt Serra in rematches.

While Miocic will likely never get a chance to run back his 2012 TKO loss to Stefan Struve, he came back to beat both Cormier and dos Santos in rematches. Check another one off for the heavyweight G.O.A.T.

Now, should Daniel Cormier beat Miocic in the UFC 252 PPV main event on ESPN+, it would be fair to declare him the greatest heavyweight in UFC history, despite a limited resume in the division. Even UFC president Dana White agrees.

However, Miocic is already there, in that top spot.

Seriously, who else could it be?

With a win Saturday, is @StipeMiocic the heavyweight 🐐? #UFC252 pic.twitter.com/JQyt9lKp1n

Could Cain Velasquez be the greatest heavyweight in UFC history? Well, he was great. But Cain did get tapped by the same guy (Werdum) that Miocic smoked for the title.

Could Randy Couture be the greatest heavyweight in UFC history? Well, he was a legend, coming back to win the title a third time when he was 43. But considering the evolution of MMA in the decade that has passed since Couture was the champ, it’s evident that Miocic has faced a higher level and depth of competition.

And then there’s Brock Lesnar. What about Brock Lesnar? Is he the greatest heavyweight in UFC history?

Well, the answer is clearly no. And not because Brock wasn’t a dominant fighter and all-around scary force of nature. It’s because Brock had all of 8 fights in the Octagon, including one where he tested positive for a banned substance.

Of course, this type of MMA math and comparison is far from actual science. But it is part of the art of debate, allowing pundits to make comparisons and quick judgements. In this case, by examining all the facts, it’s more clear than ever that Stipe Miocic is already the greatest heavyweight in UFC history.

However, this whole argument and point are really moot because Miocic and Cormier have no need for words and comparisons. They‘re fighters. That’s what they do. And on Saturday, August 15, on the UFC 252 PPV on ESPN+, Stipe Miocic and Daniel Cormier will step foot inside the Octagon and throw down to determine who the UFC heavyweight G.O.A.T. really is.

That’s way better than any examination of their careers, that’s for sure.