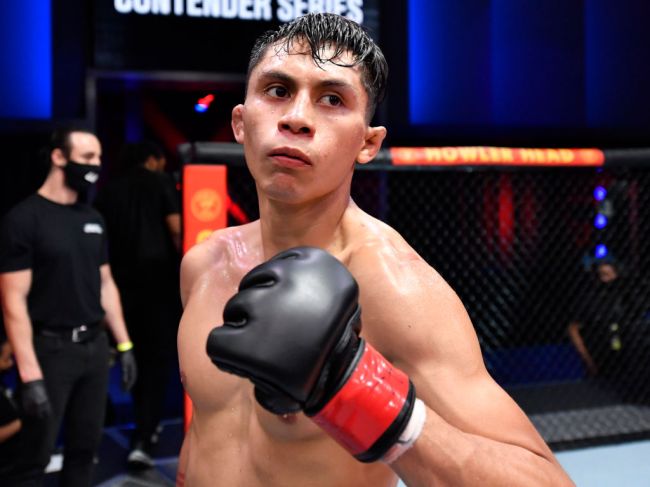 MMA fans have been getting spoiled lately by a ton of action on every single recent UFC card. If the opener to the UFC 278 prelims was any indication, that shouldn’t change today.

The UFC card opened up with a flyweight fight between a pair of fighters who had been in nothing but exciting fights so far in their careers. Those fights had unfortunately not gone their way before today, but that wasn’t going to stop either fighter from engaging in a brawl right from the opening bell.

Early on in the fight, it was Daniel Da Silva who was getting the better of the exchanges, dropping Victor Altamirano quickly and looking like he was about to finish the fight.

Altamirano survived the initial onslaught and began firing back. He would eventually drop da Silva with a big knee to the body. Once da Silva hit the floor, Altamirano began to pour it on with ground and pound and it was only a matter of time before the ref had to step in to stop the fight 3 minutes and 39 seconds into the first round.

El Magnifico opens things up with a bang 💥

This will likely be the end of da Silva’s UFC run after being for the second time in the first round and 3rd time overall in the organization.

The win gives Altamirano his first in the UFC and should earn him a chance at a tougher test his next time out. It certainly doesn’t hurt that this style of fight is exactly what UFC President Dana White loves to see.

As long as Victor Altamirano continues to compete in these kinds of exciting fights, it shouldn’t take many more fights for him to become a fan-favorite.