UFC Fighter Jordan Rinaldi Showed Off One Nasty, Crooked Finger After His Win At UFC 230 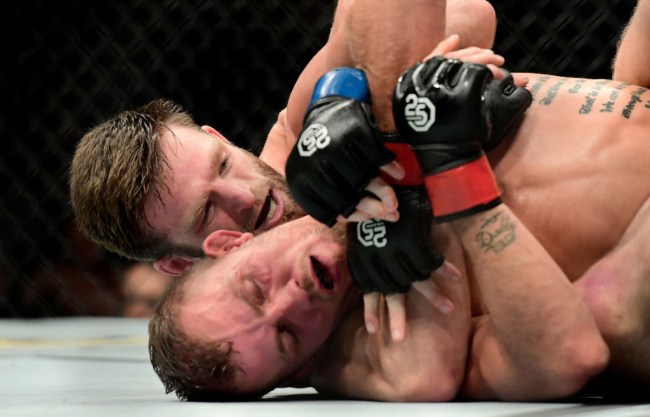 Following his win over Jason Knight in their preliminary fight Saturday night at UFC 230, Jordan Rinaldi gave the viewing audience a not-safe-for-life look at his crooked ring finger that had everyone watching wondering WHAT THE HELL HAPPENED TO HIS FINGER?!

Of course, upon seeing this gruesome appendage, after the fight the media wanted to know what was up with his borked digit.

Real talk, what the hell is wrong with @JordanRinaldi 's finger?! #UFC230 pic.twitter.com/rcmNpNqhvd

“So, he bit me. No, he didn’t (laughs). Dirt bike wreck 15 years ago so it’s not special. It breaks every now and then so it hurts,” Rinaldi explained. “It’s been like this for 15 years, or 16 now, I’m getting old. I should have done it during the interview, just like, ‘Joe Rogan it’s great to see you,’ (holds hand up) like a Ricky Bobby thing.”

Then he talked about how if freaks people out, especially women. Except for his wife, who had no problem with it right from the start, for one very unusual reason.

“My wife and I were on like our first or second date at like Steak and Shake after a movie or something, don’t judge me, and I saw her see it and stare at it for a second and I was like come on, man,” said Rinaldi. “And then I hid it and she saw it again later and I was like, ‘Yes, it’s crooked.’ And she was like, ‘Mine is too!’ Her left ring finger is crooked, not as much as mine, but it’s crooked. She slammed it in a sliding door when she was young so it was love at first sight. It was meant to be. Left-hand, it’s our wedding ring finger too.”