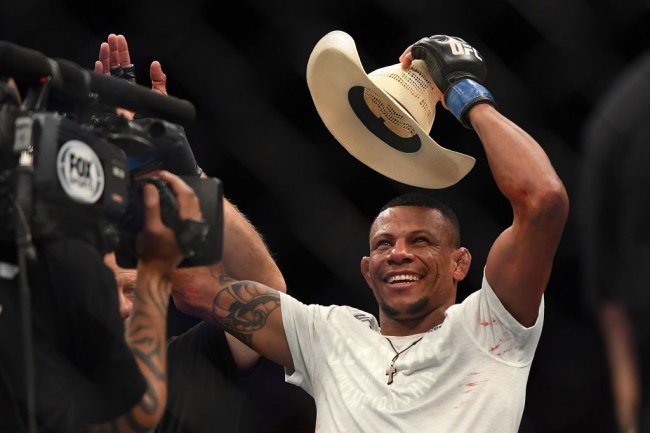 What did you do on Christmas Eve? Eat so much Chinese food that you can’t get drunk, watch Home Alone for the 9,829th time, and wrap gifts you bought from the gas station 2 hours prior? Me too.

UFC welterweight Alex “Cowboy” Oliveira’s Christmas Eve was a bit more happenin’. The 30-year-old went home to Tres Rios, Brazil to visit family for the holidays when he found himself in a near deadly situation at a gas station that sounds much like the altercation between news outlets in Anchorman.

Oliveira went to put gas in his mother’s car on Christmas Eve when he stumbled across his aunt and other members of his family engaging in a confrontation with men with guns, machetes, and grenades at the gas station he was pulling into. Kind of suspicious that Oliveira just happened to pull into the same gas station where family members were under distress, but that’s neither here nor there.

Via a report from Globo:

“It was a good night, you know? But there are a lot of people in our family who do not like to enjoy Christmas. I went out to feed my mother’s car, and on the way I saw my aunt in confusion. I told my aunt not to interfere, I just stopped to try to ease the stop. Because when you have a fighter involved in confusion, you know, right? One guy already got a gun in my nephew’s face. Then began a push-push. The guys were with a machete, a knife, a grenade. And they threw the grenade at me. He flew fragments on my leg, on my foot.” [Via]

Oliveira went to a local hospital and underwent a small surgery on his leg to remove the fragments of the grenade, he told TV Rio Sul. Oliveira has become accustomed to hospitals this month, as just a couple weeks ago he needed 38 stitches in his head after a second-round submission to Gunnar Nelson. The Cowboy is likely begging for 2019 to come.