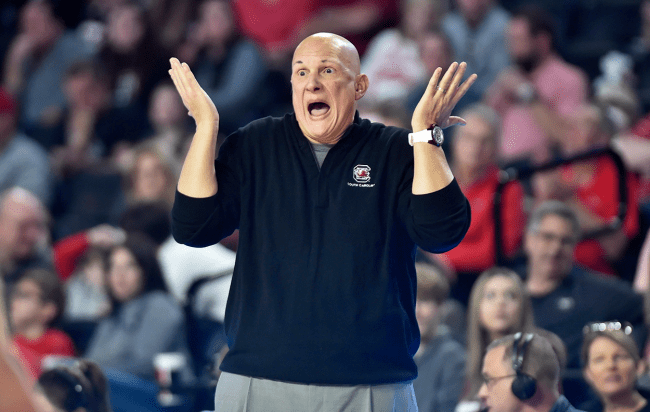 It didn’t take long for Frank Martin to find a new job after being let go by South Carolina. 11 days after being fired by the Gamecocks, Martin was hired as the next head basketball coach at the University of Massachusetts.

Now that he has a new job, Frank Martin is not holding back online.

Martin took on the Twitter trolls immediately after the announcement was made official and even went after the weirdos. He is very funny.

One non-UMass fan jokingly welcomed Martin to the Atlantic 10 Conference as a “sacrificial lamb.” The fan, who supports St. Bonaventure, is excited for Martin and the Minutemen to lose to the Bonnies twice a year.

In response, Martin made it clear that he does not plan to lose.

I appreciate the welcome. Obviously you don’t know me very well https://t.co/NFkPfTqssL

In turn, the Bonnies fan joked with Martin about taking a “haircut” off of the offer that was rumored to have been made to Schmidt. Martin, who is currently bald, noticed that he was starting to lose his hair in May of 2020 and decided to shave his head. He absolutely body bagged the St. Bonaventure fan.

I don’t have hair therefore I don’t need a haircut. Let’s have some fun https://t.co/jlwLnYHi9H

And then there was the funniest of them all. A full-grown man made an incredibly strange, super lame joke about UMass stinking and farts.

Martin hilariously replied to the troll and promised to share with him a fart one day.

I’ll make sure I share one with you the day I meet you https://t.co/o5SgrFRI7I

Martin has previously coached at Kansas State and South Carolina, has reached the Final Four once, the Elite Eight once and the NCAA Tournament five times in 15 years. He will try to rebuild a mediocre to poor UMass program and share some farts along the way.