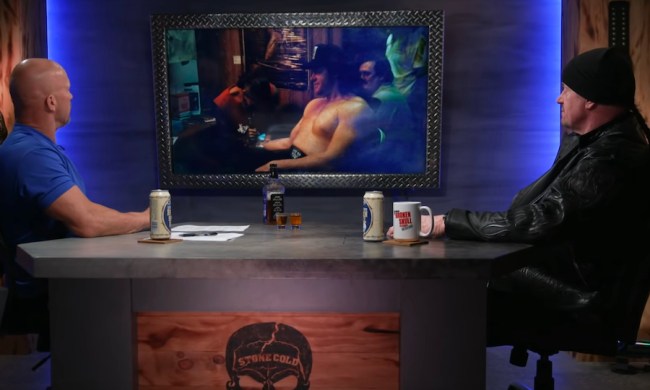 The Undertaker might have retired his in-ring persona at the Survivor Series this past Sunday but I’m hopeful Mark Calaway never goes away because his stories are legendary.

“The Phenom” has been hitting all the news outlets, websites, and podcasts – every show except the best wrestling podcast going – to discuss his 30-year career and dish out behind the scenes stories never shared before. The Undertaker even spent some time on Cameo.

On part two of his appearance on “The Broken Skull Sessions” with “Stone Cold” Steve Austin, the Undertaker shared the story of his first tattoo.

Austin shares a photo of The Undertaker getting a tattoo done and mentions his friendship with “The Godfather” Charles Wright. The two men are still close friends and, when they met, Taker had zero tattoos.

Austin asks how influential Wright was on Undertaker getting his first ink done.

“This photo is in Las  Vegas, of course, and Paul Bearer is with me. We went straight from the arena to here. The artist’s name is Smiling Paul.

What you can’t see is pretty much everything, from the left of me on, is nothing but Hells Angels.

Word got out that The Undertaker is there and they want to see how I got my first tattoo.

And it was no small tattoo. It took up the whole outside of my forearm.

So everyone is there and partying and having a good time.

The Undertaker explains to Austin he was booked to do two matches the next day, he got zero sleep the night before, and his arm was swollen.

He also had two matches against a performer who wasn’t always the best at following directions.

“I went right from there, straight to my hotel room, just to grab my bag to go to the airport. I had a double shot the next day.

I was working with Hellwig at the time, Warrior, and I was like ‘Jim, look, my arm is blown up. Just try not to hit my arm.

We were five seconds into the match and he grabbed hold of my arm.

I was like ‘Good Lord, this is gonna be a long day.”

The Undertaker is able to laugh about the situation now but I’m more than positive he had some unkind words for The Ultimate Warrior, a guy notorious for not taking care of people in the ring.

For more classic tales about The Undertaker, check out his time being the judge in “wrestler’s court,” taking naps inside coffins, and one of the many times he wanted to beat the crap out of Shawn Michaels.