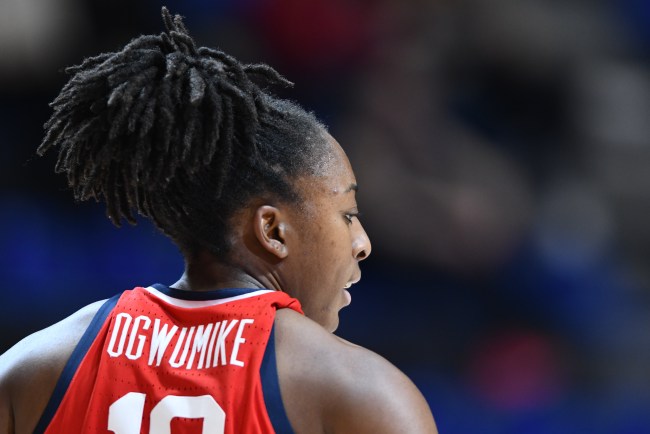 Nine out of 10 Americans believe it’s impossible to conjure up a reason why Nneka Ogwumike shouldn’t be an Olympian that doesn’t require a consultation with Nurse Ratched.

Which camp do you belong in?

Okay, that last one is unverified, but given that resume, who would argue.

Nneka Ogwumike should be playing, coaching, and singing the national anthem during this summer’s Olympics in Tokyo, but instead the Los Angeles Sparks forward will be home, staring at her reflection in her Purple Heart medal, wondering her country could betray her like this.

The 32-year-old was omitted from the roster of the upcoming Olympics beginning July 27 in Tokyo, becoming the only WNBA MVP to never make a U.S. Olympic basketball roster.

For the States. For the history. For the gold.

A double gut punch for Ogwumike, who was not part of the team that won the gold medal in the 2016 Rio games, but later that year won she was named WNBA MVP and helped Sparks lead the WNBA Championship.

Team USA head coach Dawn Staley weighed in on the decision, which somehow made it even more egregious.

Breaks my heart that Nneka isn’t on this team,” Staley said, per the San Jose Mercury News. “Having to make a decision today, if we had to make a decision a month from now, I’m sure she’d be healthy. This was one of the things she wanted to do.”

Ogwumike suffered a knee sprain on June 1, but her injury timeline would have easily made her available for the team’s first game in Tokyo on July 27. For perspective, Also Worthy Player Diana Taurasi  suffered a FRACTURED STERUM less than a month ago and she was awarded a roster spot.

Nneka’s twin sister and fellow Los Angeles Sparks star laid out the injustice far better than I did.

Nneka Ogwumike seeing that she didn’t make the Olympic team despite all her amazing accolades. #WNBATwitter pic.twitter.com/qdS0vCsInr

Other notable figures around the league also weighed in.

While I’m excited to see @usabasketball chase a 7th straight 🥇 I’m having a TOUGH time wrapping my mind around the fact @nnekaogwumike is not on that roster. Periodt. #MakeItMakeSense

I absolutely cannot believe that @nnekaogwumike was left off the USA Olympic roster. I'm shocked. And bummed.

Nneka has been preparing for this for years. She is ready. BEEN READY and Y'ALL STEADY PLAYING WITH HER. And it kills me cuz she'll never say nothing, she just takes it on the chin and keeps it moving but F all that! THIS IS SOME BUTTERY BS!!!!!

Shameless Self-Plug Alert: I’ve started an Instagram news Series called The Friday 5 at 5, detailing the five best stories of the week with dirt poor graphics. New installments release every Friday at 5. Below was this past Friday’s. Give it a like and I’ll buy you a Heineken.