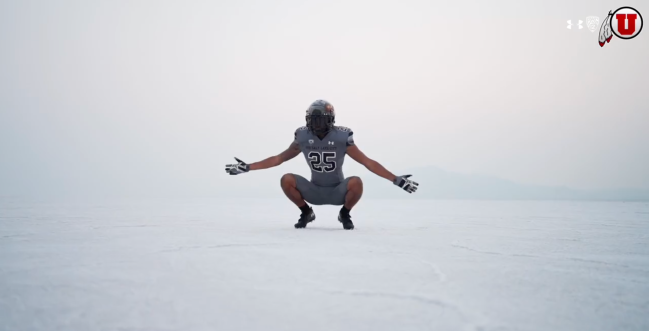 University of Utah Athletics / Under Armour

The University of Utah football team will debut new helmets during this weekend’s game against No. 4 Oregon and they are pretty special. Each helmet has been hand-stenciled, painted and airbrushed and will honor United States servicemen and women.

In addition to the helmets, the Utes will rock all-grey uniforms that correspond with the lids. The entire uniforms, while paying tribute to the military, are specifically designed in style with the U.S.S. Salt Lake City.

The ship, which launched in 1927, had the distinction of having taken part in more combat engagements than any other ship in the World War II Pacific Fleet. Intricate details on the uniform are both meaningful and well-presented.

Each of the jerseys features a single battle star on the right shoulder. When all 11 players are on the field, it will represent the 11 battle stars that was earned by the U.S.S. Salt Lake City.

(Author’s note: as someone who typically hates every Under Armour uniform they put out, these are a significant exception.)

Here is a look at the uniforms in full and the history behind them:

We are proud and excited to wear these incredible uniforms this week to honor all the brave men and women who serve this country 🇺🇸@UtesEquipment | #USSSLC pic.twitter.com/RjfPQHOWQA

From top to bottom, Utah’s uniforms are really unique, creative and beautifully-executed.

Will they be enough to give Utah the extra edge it needs to take down a top-five Oregon team? I don’t know.

But win or lose, they’ll look great doing it.