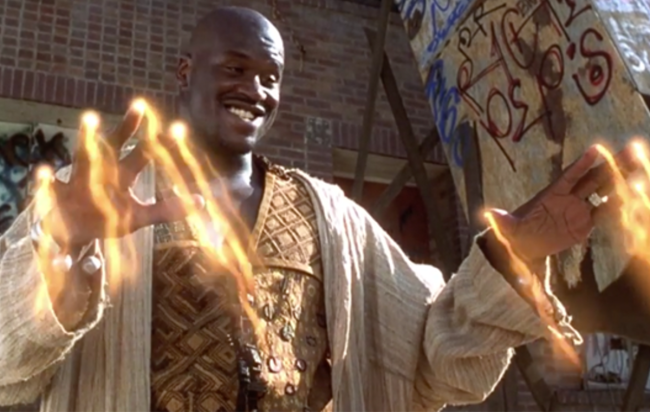 Shaquille O’Neal initially made a name for himself by being absurdly good at basketball, and while most people would be more than satisfied with being the top pick in the NBA Draft, he didn’t waste any time leveraging his success in the sports world before attempting to conquer other realms.

Of the many NBA players who’ve stepped into the booth to give the whole “rapping” thing a shot, Shaq is arguably the most impressive on the mic and easily the most successful (his debut album ended up going platinum), and while he’s a man of many talents, it’s safe to say acting isn’t one of them.

O’Neal might be able to hold his own when he’s plugging Gold Bond and Icy Hot on television, but he doesn’t exactly have the hottest track record as far as movies are concerned. In 1996, both he and Michael Jordan set their sights on the silver screen, and while Space Jam wasn’t exactly a cinematic triumph, it’s a fucking masterpiece compared to the absolute trainwreck that was Kazaam.

Shaq’s natural charisma may not have been enough to prevent his Hollywood career from fizzling out almost as soon as it began, but he was able to use it to his advantage after joining Inside the NBA following his retirement. However, he’s recently found himself at the receiving end of an amount of criticism that rivals what he had to deal with following the release of Kazaam courtesy of some Freezing Cold Takes he’s delivered on the show—including an awkward interview with Donovan Mitchell where he bluntly told the guard he’ll never be able to become a superstar.

A number of players came to Mitchell’s defense, and on Tuesday, a lawmaker in Utah joined their ranks, as State Representative Kera Birkeland introduced a resolution to voice her support for the Jazz guard and used it as an opportunity to go scorched earth on O’Neal.

According to Yahoo Sports, Birkeland wanted to honor the efforts Mitchell has made to give back to the local community, but she also took great joy in using the resolution (which passed by a vote of 67-5) to roast O’Neal in a variety of ways. In addition to suggesting Kobe Bryant and Dwyane Wade deserve the bulk of the credit for the championships he won, she also brought up the crappiness of the Shaq Fu video game as well as his abysmal free throw percentage.

However, that wasn’t the only percentage she incorporated, as she highlighted the 5% rating Kazaam has on Rotten Tomatoes, which is just a hilariously petty move. There’s no telling how Shaq will respond to this, but I can only hope he handles it more gracefully than he did when someone photoshopped a picture of Mitchell dunking on him.