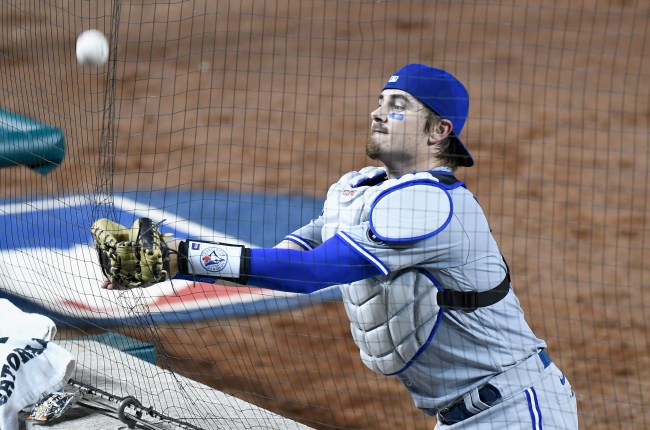 Blue Jays catcher Reese McGuire suffered through a humiliating arrest on February 7th as authorities bagged him bopping his bologna inside his white Mercedes SUV outside of a strip mall in Dunedin, Florida.

The incident took place in the Dollar Tree parking lot within close proximity to the team’s spring training facility.

The 25-year-old former first-round draft pick pleaded no contest and was fined $450 after initially being charged with exposure of sexual organs, a first-degree misdemeanor which is punishable by up to one year in jail and carries fines up to $1,000, the New York Post reports.

Video obtained by TMZ depicts what went down that day, with a repeatedly apologetic Reese telling police he checked to make sure “no one was looking,” but “realized what an idiot, what a dumb place to be” when officers approached his vehicle after a bystander phoned in.

McGuire responded, “I don’t know… I just decided to park.

“I realized that I made a mistake, having my pants down, doing what I was doing,” he added. “I really am apologetic. And I know I shouldn’t have been doing this.”

Hopefully this won’t be too big of a stain on McGuire’s legacy and the Twitter barbs will eventually fade away. But that day is not today.

Reese McGuire should hit a ton of homers for the Jays this season.

I knew he didn't play for the Mariners

Because the Mariners never beat anything

Reese McGuire may play for the @BlueJays, but he's a Yankee at heart 🤣 pic.twitter.com/K3bmAnlBZL

Live footage of Reese on his way to the parking lot 👀 pic.twitter.com/6erAAMPOsJ