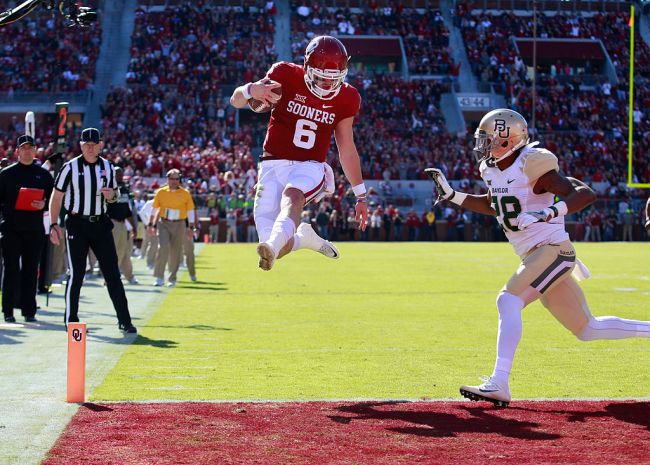 2017 was a big year for Baker Mayfield. He led Oklahoma to a road win against an Ohio State team that was ranked 2nd in the country at the time. He led the Sooners to the College Football Playoff. He won the Heisman.

He also talked a lot of trash that season. That Ohio State win led to the famous moment where Baker planted Oklahoma’s flag at midfield of the Buckeyes’ stadium.

It turns out some of that trash talk was also directed toward the team that Matt Rhule was coaching at the time. An undefeated Oklahoma and a winless Baylor met in Week 4 that season and before the game, there was some trash talk between Baker and the Bears.

The video resurfaced following the news that Rhule would now be coaching Baker as he joins the Carolina Panthers.

The last time Baker Mayfield and Matt Rhule were on the same field together, Baker told the Baylor Bears in pregame: "You forgot who daddy is. I'm going to have to spank you…" https://t.co/qU45LdLSZS

Baker and Oklahoma would go on to win the game to extend their record to 4-0, but they certainly didn’t spank Baylor. They led by only 4 heading into the 4th quarter and only won by a score of 49-41.

Baker Mayfield has a weird history with the people who will now surround him as a member of the Panthers. One of his top receivers didn’t want him to be the team’s new quarterback. His new offensive coordinator thought he was the 6th best QB in his own draft class. Now this video has surfaced of him telling Matt Rhule’s Baylor team that he was going to spank them.

It seems like Baker may have some awkward conversations as he meets with his new Carolina Panthers teammates and coaches.