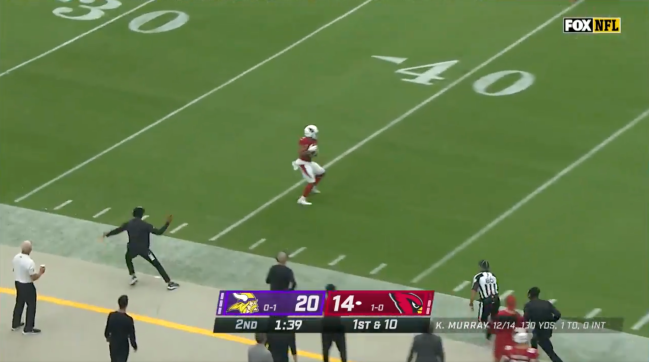 How in the world was Rondale Moore this wide open?!

Right before halftime of Sunday’s game between Minnesota and Arizona, the Cardinals got the ball back with one minute and 46 remaining. They lined up at their own 23-yard-line and went to work on the two-minute drill.

However, they only needed about 13 seconds because the Vikings just forgot to play defense.

There are three things to focus on during this play. For starters, let’s talk about Kyler Murray. This man is a cheat code.

The former Heisman Trophy winner took a three-step drop and the pass rush immediately closed in. Instead of taking the sack for a loss, he put it in reverse, scampered away from two crashing ends and made a ridiculous throw on the run.

On the receiving end, Moore was wide open. The rookie receiver out of Purdue was about 45 yards down field with absolutely nobody around him. Minnesota left him alone on an island. It’s truly unexplainable.

And then, in the booth, Gus Johnson did his thing again. He has had a huge weekend and kept the ball rolling with another animated call of the Murray to Moore connection.

The play and the call were great, and the shootout first half was exciting, but I simply cannot figure out how Moore was so open. He was all by himself, and the only explanation is that the Vikings just forgot about him. Terrible defense led to a fun score.