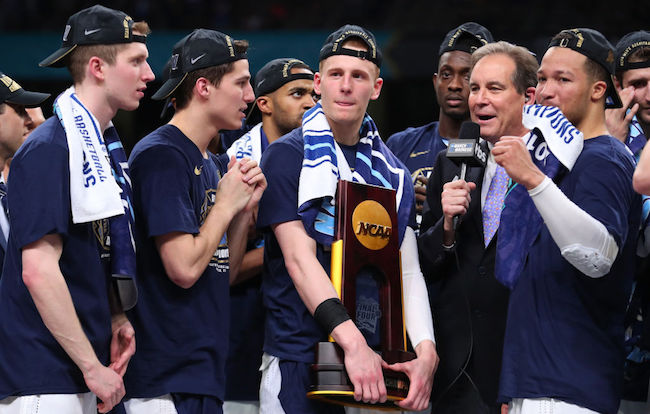 During this year’s NFL playoffs, the city of Philadelphia lived up to its reputation for having some of the craziest fans in the country during the Eagles Super Bowl run. Once the NFC Championship rolled around, police did everything they could to prepare for the madness that they knew would consume the city regardless of whether the team won or lost. These preparations included issuing statements about preparing for riots and, perhaps most notably, greasing up street poles to stop fans from climbing them. This did literally nothing to stop them after they beat the Vikings, and neither did the gear oil they used before the Super Bowl.

You’d think that by now Philadelphia would just have some kind of Purge protocol in place in the event of a major sports victory, but it looks like they’re ignoring the definition of insanity by doing the same thing over and over again and expecting different results. They greased poles in the city ahead of Monday night’s NCAA Championship game in preparation for a Villanova victory, and the team secured the trophy in impressive fashion.

They say the third time’s the charm, and it appears that was the case on Monday night, as fans were unable to scale any poles and instead proceeded peacefully and quietly back into their homes aaaaaaaaand of course they didn’t. This is Philadelphia we’re talking about.

There were plenty of pictures and videos of people celebrating in various ways over the course of the night— a night which involved climbing lots of poles.

People jumping over a street fire while one kid watches from atop a traffic light. Safe to say the celebration's on pic.twitter.com/00gYzZe4VO

They eventually got the sign out and started waving it around. They had greased the poles, but that didn't stop some from climbing and falling. Some Michigan stuff and branches were lit on fire and danced around. pic.twitter.com/4DMuX2v4Nx

I’m glad that the fact that Villanova isn’t even really in Philly didn’t stop people from lighting shit on fire anyway.