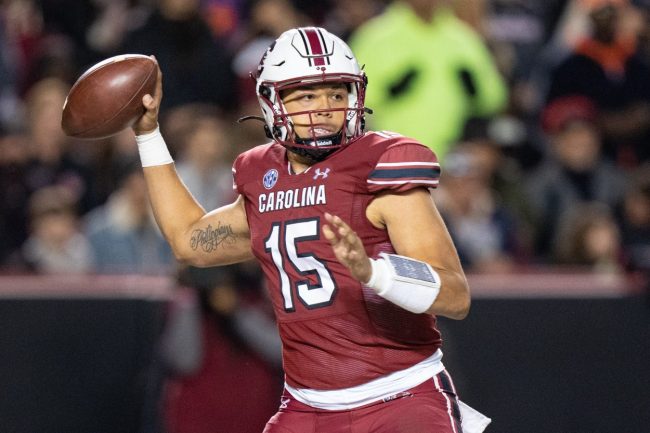 Incoming Virginia Tech transfer quarterback Jason Brown has had quite the journey throughout his college football career. In addition to his on-field play that has led him to his “dream school,” Brown is a hilarious personality addition to the locker room.

On Thursday night, Brown committed to play for the Hokies. The Fredericksburg, Virginia-native grew up taking unofficial visits to Blacksburg, attended every event at the school and always wanted to play for Virginia Tech.

However, by the time that National Signing Day came in 2017, Brown only had a preferred walk-on offer from the Hokies. And it was on defense, as a linebacker.

But Brown wanted to play quarterback.

As a result, he signed with FCS program Saint Francis before transferring to South Carolina. During his one season with the Gamecocks in 2021 he led his team to wins over Florida and Auburn.

On Thursday, Brown announced that he is taking his talents back to the Commonwealth of Virginia. He will play his final year of eligibility at the school he always dreamed of playing for.

Been waiting awhile for this one.. I’m comin’ HOME! 🧡🦃 pic.twitter.com/Sxn5uRVi9U

Brown has a good arm and throws a nice ball. He also has the prototypical size at 6-foot-3, 229 pounds.

Although he will have to compete for the starting job against Marshall transfer Grant Wells, the addition of Brown is nothing but a positive for the Hokies. Whether he plays in 2022 or not, he is a great locker room guy who has worked hard to get where he is and is well-liked by his teammates.

It’s not hard to see why. He’s hilarious.

Should Disney ever choose to remake The Waterboy, Brown could be casted as both Bobby Boucher and his father Roberto. He did his best impression during spring practices in 2021 and it could not be funnier.

@AdamSandler if you ever need another person for waterboy, just know I got you 😂😂😭😭😭 pic.twitter.com/sfCDMtc8oQ

Who wouldn’t want that guy in their locker room?