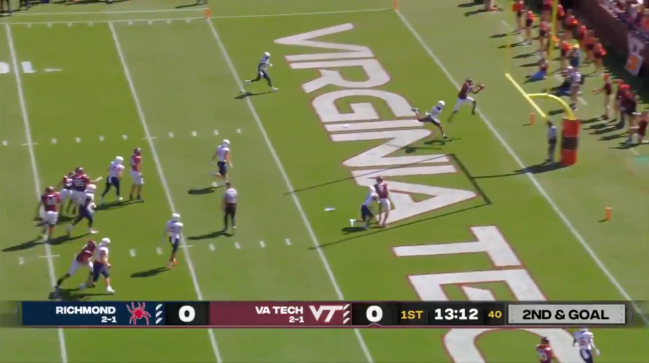 It took less than two minutes for Virginia Tech to find the end zone against the Richmond Spiders on Saturday afternoon. The Hokies went 65 yards on five plays and capped off the drive with one of the best catches you will see this season.

Quarterback Braxton Burmeister faked the play action, took a two step drop and fired a laser to the back of the end zone. On the receiving end, Tré Turner went up to pull down the lofty ball and contorted his body in impressive fashion to make the catch.

Oh, no he didn't 😳@tre11turner comes down with a wild #SCTop10 TD catch … CC: @SportsCenter

The old adage for quarterbacks goes something like “if not our ball, than nobody’s.” That was certainly true on this play.

Burmeister put his throw on the backline where only his receiver could get it. The defensive back never stood a chance, but — for a moment — it didn’t look like Turner did either.

And yet, the 6-foot-2 junior levitated, made the catch and somehow got his left foot down. Even though the grab would not have counted on the NFL level, all you need is one foot on the collegiate level.

Turner most definitely got that one foot down and did so in impressive fashion. Look at the absurd elevation here. 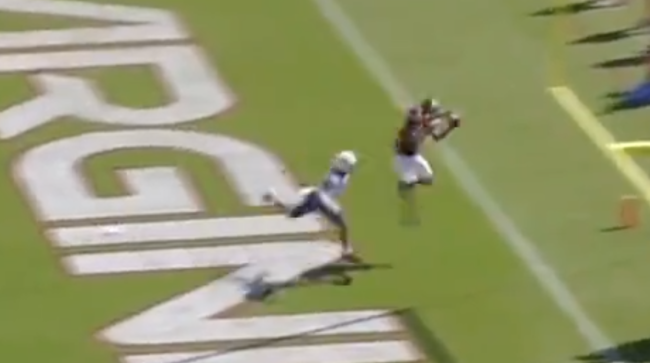 And then, later in the game, he did it again.

Have a day, Tré Turner!