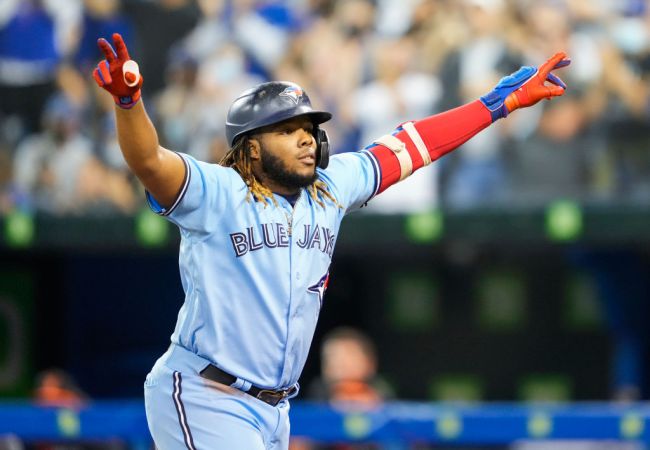 When Vladimir Guerrero Jr. was growing up, he would spend most of his time with his mom in the Dominican Republic and summers with his father, Vlad Sr., in Montreal. Today, the Blue Jays third baseman lives primarily in Toronto during the season, but often travels home to the D.R. during the offseason.

That was the case earlier this week when, after being eliminated from the playoffs on the final day of the regular season, Guerrero Jr. went back to his hometown. Upon arrival, he picked up right where he left off in the MLB.

During the 2021 season, the 22-year-old slugger hit 48 home runs. He added at least one more MONSTROUS, TOWERING moonshot to his résumé while in the Dominican earlier this week.

With the entire town in attendance, Vladdy Jr. showed up to his local softball field and decided to get in on the action. It went exactly how you expect.

The pitcher lobbed him one just above the numbers and Guerrero sent it into orbit.

It looked like a few other high-profile Dominican players also joined in on the action, but Guerrero’s massive power was the highlight.

Imagine showing up to your Sunday night softball league and toeing the rubber, only to look down at the plate and see the potential American League MVP standing there, salivating in the box. And then imagine having to actually throw him a pitch, only for him to do exactly what you feared— crush it over the fence into the next area code over.

At that point, knowing that disaster was imminent, all you can do is embrace the situation and enjoy the greatness.